This Company Has the Fastest Mobile Network Speed

By now, all four major U.S. mobile wireless carriers have either launched or announced launch dates for their first fifth generation (5G) networks. 5G networks may be capable of download speeds of up to 10 gigabits per second (Gbps), 10 times faster than today’s 4G/LTE networks. Still, current technology promises a doubling of network speed as soon as the 5G networks are deployed and smartphone makers like Apple and Samsung begin offering 5G handsets.

Until then, most of us will be left slogging along with our 4G networks and phones. In reality, however, that’s still pretty darn good. Ookla, makers of the Speedtest mobile and broadband network testing applications, recently published a speed comparison of the nation’s four major wireless carriers. The results were based on more than 5 million mobile 4G network speed tests run with Ookla’s Speedtest app during the first quarter of 2019. 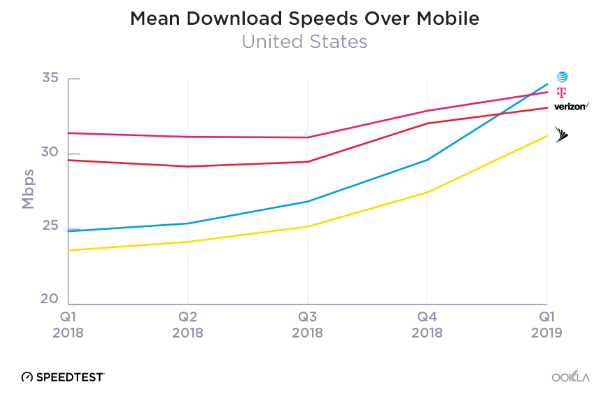 Apple’s iOS devices claim a startling 70% of AT&T’s customer usage, according to Ookla. Remember that the first iPhones were exclusively available to AT&T subscribers way back in 2007. Apple also claims 62% of Verizon’s users, 54% of Sprint’s and 49% of T-Mobile’s. Ookla noted that Android phones on AT&T’s network posted a mean download speed of 44.9 Mbps. That means that Apple’s devices are dragging down AT&Ts mean speed scores, and it indicates that network speed may not be the first thing to consider when choosing a mobile carrier.

Streaming a 4K UHD video to a mobile device requires about 25 Mbps of bandwidth and could be the most data-intensive application most consumers use. Based on Ookla’s results, more than half of 4G mobile networks can already stream a video at that speed or better.

So why the need for all that 5G speed? Answer: self-driving cars and the Internet of Things, both of which will require huge amounts of bandwidth running at very high speeds with very little delay (latency). Besides, as more speed and bandwidth become available, more demanding applications are certain to be developed to take advantage of the higher speeds.

For now, however, phones from Apple (the iPhone XS and XS Max, with more to follow), LG (V40) and Samsung (Galaxy S10 5G this summer) will help you get the most out of AT&T’s 5G network in the 19 cities where 5G technology is or soon will be using mobile hotspot technology. No date has been set for a roll-out of 5G service to all AT&T customers.

T-Mobile has been testing 5G networks since last year and plans to introduce it widely next year. Unlike the other three carriers, T-Mobile has chosen to cover more area using a lower, slower wavelength. This means that the company’s coverage will be wider, but that phone makers will need to make a different device specifically for T-Mobile’s network. Nokia is a partner, and Samsung is likely to join as well.

Verizon launched its first 5G wired networks last year and has kicked out its first wireless network already this year. Samsung, LG and Motorola all have handsets that will work with the Verizon 5G wireless network.

Sprint is rolling out its 5G networks next month in nine U.S. cities. LG’s V50 ThinQ 5G is the company’s first official 5G device, and Samsung plans to release a compatible device by this summer.

If there’s a moral to this story it’s don’t feel that you have to run right out and invest in a 5G phone or you’ll be left behind. The roll-outs of 5G networks are just beginning and won’t be complete for a few years. And the farther you live from a major metropolitan area, the longer you’ll wait for 5G service. Networks with 4G speeds like those discussed here are perfectly capable of taking care of business.