A 20-Year Forecast for Airplanes (BA) 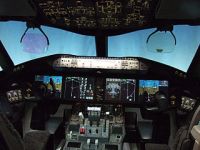 Boeing cockpitThe demand for new civilian passenger and freight aircraft in the 2012-2031 time frame promises to double the existing fleet at a cost of about $4 trillion over the 20-year period. The forecast comes from the Airbus division of the European Aerospace Defence and Space Co. in the company’s latest Global Market Forecast.

Airbus and its chief rival Boeing Co. (NYSE: BA) will slug it out for supremacy, particularly in the passenger market, which Airbus expects to generate $3.7 trillion of the total demand. If Airbus is right, total revenues for both companies will nearly double in the 20-year period.

The company expects passenger traffic to grow at an annual average rate of 4.7%, with more than half the growth coming from emerging economic regions. The passenger fleet will grow from more than 15,550 today to more than 32,500 in 2031. Here are a few other prognostications:

A presentation and the full report are available here.