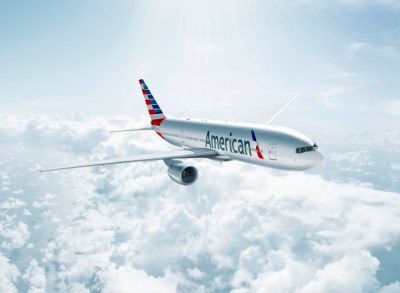 Source: courtesy of American Airlines
The 777 family of planes is Boeing Co.’s (NYSE: BA) best-selling dual-aisle, two-engine plane. Of the six models the company has delivered, the 777-300ER (Extended Range) and the 777-200LR (Long Range) are the newest, as both having been introduced since the beginning of the new century. The first extended range model, the 777-200ER, was delivered to and put into service by British Airways in February 1997.

The 777-300ER is the 777 family’s current best-seller, with a total of 721 orders and 485 deliveries since the plane was introduced. The order book for the 777-300ER totals 236 planes, including 56 more to Emirates Air, Boeing’s biggest customer for the plane with a total order of 120 aircraft. The company delivered its first 777-300ER to Air France in May of 2004, and the plane went into service the following month.

Boeing also makes a freighter version, the 777F, which has attracted a total of 134 orders and first went into service in February of 2009 with Air France. The freighter is based on the 777-200LR and has a cargo capacity volume of about 23,000 cubic feet and a total payload capacity of 102 metric tons.

The 777F has a list price of $301 million, and Boeing is having a hard time selling the planes because airlines have begun carrying cargo in the bellies of their larger wide-body planes like the 777-300ER, which can carry up to 7,120 cubic feet of cargo in its hold as well as a full load of passengers. The plane’s maximum payload is 70 metric tons.

Belly cargo now gets about 60% of the market for cargo, according to some industry experts, and there are some who believe that could rise to 70% as the fleet of wide-body planes like the 777-300ER grow larger. In its latest outlook, Boeing claims that dedicated freighters still carry 60% of air cargo.

Boeing believes that it will sell 850 777Fs between now and 2032 at a total list price of around $240 billion. But annual orders for the company’s 777F peaked at 42 in 2011. So even though the 777-300ER costs more than the 777F, its ability to carry passengers as well as freight and to fly farther are compelling, especially for freight that is not time-sensitive. As shipping costs continue to rise, more shippers may discover that money saved is worth the longer delivery times.