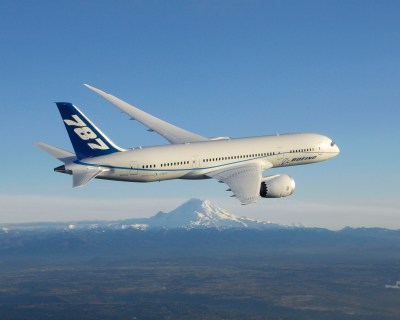 Source: courtesy Boeing Co.
The 787 Dreamliner from Boeing Co. (NYSE: BA) includes some of the most advanced technology in the world. From lightweight composite body sections to high-tech cockpit tools, the plane has experienced a series of delays and problems that caused long delays and raised costs far beyond initial estimates.

The most recent problem was reported Tuesday by the St. Louis Post Dispatch and involved fuselage sections built in South Carolina and shipped to Washington for final assembly. According to the report, when technicians in Washington joined the fuselage and wings, then removed the support holding the body sections up, nearly 100 improperly installed fasteners fell to the floor.

Just the week before, some 7,500 production line workers at the South Carolina plant were awarded performance bonuses of between $3,000 and $4,000 each. And because the workers in Washington must complete the work that should have been finished in South Carolina, 787 deliveries are delayed. Boeing expects to build 10 787s a month.

It took Boeing nearly eight years to get its 787 Dreamliner off the drawing board and into service with the world’s airlines. The total cost for development and manufacturing has been estimated at $32 billion. The initial estimates called for a development period of around four years and a budget of about $6 billion.

The 787 Dreamliner is Boeing’s most advanced airplane. The plane’s body is 50% composites and 20% aluminum, almost the full reversal of the make-up of the 777, which is 12% composites and 50% aluminum. The lower weight of the composites is a main contributor to the 787’s fuel efficiency. Boeing claims the airplane is 20% more fuel efficient than similarly sized airplanes and emits 20% less pollutants.

The U.S. Federal Aviation Administration (FAA) and the European Aviation Safety Agency (EASA) have recently certified the 787-9 to begin commercial service. The somewhat smaller 787-8 has been shipping to customers since late 2011. Boeing will ship its first 787-9 to Air New Zealand later this summer.