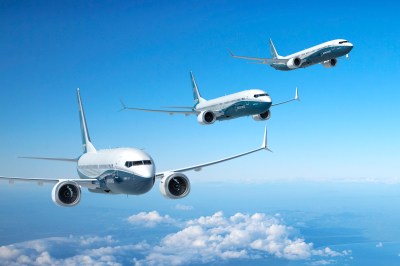 Source: courtesy Boeing Co.
The U.S. Federal Aviation Administration (FAA) last Friday ordered Boeing Co. (NYSE: BA) to modify the technology included on its current models of the 737 single-aisle, narrow-body passenger jet that has been the company’s bread-and-butter product since going into service in February of 1968. The order is effective immediately and is aimed at preventing computer criminals from causing damage to the planes.

The order applies to the 737-700, -700C, -800, -900ER and the three versions of the still-to-be-built 737 MAX products, the -7, -8 and -9. Earlier models of the plane are not included because only the later models are more widely connected to external networks which, the FAA said, “may allow the exploitation of network security vulnerabilities resulting in intentional or unintentional destruction, disruption, degradation, or exploitation of data, systems and networks critical to the safety and maintenance of the airplane.”

According to a report at USA Today, Boeing has been ordered to “ensure that the airplanes’ electronic systems are protected from access by unauthorized sources external to the plane, including those possibly caused by maintenance activity.”

Boeing has delivered more than 10,700 737s and currently has nearly 3,900 unfilled orders on its books for the short-to-medium range jet that can carry from 120 to 220 passengers in the eight variations of the plane that are currently available.

The Next Generation 737s are powered by a pair of CFM56-7BE engines that were introduced in 2009 by CFM International, a joint venture between General Electric Co. (NYSE: GE) and French engine maker Snecma. Combined with improvements to the 737’s airframe, an aircraft equipped with the new engines enjoys a 2% reduction in fuel consumption.