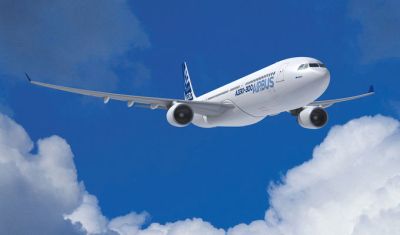 Source: Airbus Group NV
The Farnborough International Airshow officially takes off on Monday, but Airbus is making news ahead of the show, reportedly telling customers that it is going ahead with plans to upgrade its A330 dual-aisle, twin-engine wide-body jetliner with new engines that will increases the plane’s range and improve its fuel efficiency by 14%. In keeping with the company’s naming convention, the re-engined plane will be called the A330neo.

Interestingly, the engines the company is considering are variations on the Rolls-Royce engine that Boeing offers as a choice on its 787s. The Airbus version of the R-R engine is dubbed the Trent 7000 and delivers 72,600 pounds of thrust and a significantly larger fan, a primary factor in improving fuel efficiency.

When Airbus strategy chief Marwan Lahoud said that the economics of an A330neo would be unbeatable and the cash operating cost would be equal to the cost of operating a 787-9, Boeing’s John Wojick said that the A330neo could not compete with the 787-10 at any price. That is what is known as comparing apples and oranges. On an apples-to-apples basis, Leeham concluded that an A330neo “significantly narrows, but does not entirely close” the gap with the 787.

While nothing in the aircraft business is certain, it is all but sure that Airbus will announce that it is going ahead with an A330neo. The company really can’t afford not to.