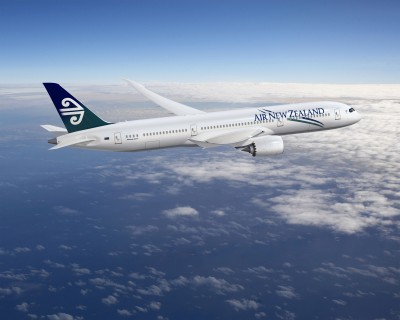 The 787 Dreamliner is Boeing Co.’s (NYSE: BA) most advanced airplane, and arguably the most challenging to get into production. It took nearly eight years to get the new aircraft off the drawing board and into service with the world’s airlines, at a total development and manufacturing cost estimated at $32 billion. That is about twice as long as the company’s initial estimate and more than five times more expensive.

The first delivery of Boeing’s 787-9 Dreamliner to Air New Zealand took place on June 30, but was celebrated in New Zealand Wednesday. The 787-9 is a stretched version of the Dreamliner that is 20 feet longer and can carry up to 40 more passengers than the original 787-8. Boeing has taken orders for 490 of its 787-8 model and has so far delivered 161 planes.

Air New Zealand has ordered 10 of the stretched planes and 25 other customers have placed orders for a total of 409 of the new planes. The largest customer for the planes is Etihad Airways of the United Arab Emirates, which has ordered 41 of the 787-9s.

The most interesting thing about the price of a 787 is not how much it costs, but how little. Airlines never pay list price for a plane, and the actual price for a 787-8 is reported to be around $117 million. One analyst has estimated that the cost to build one of these planes is about $232 million, which means that Boeing is losing $115 million on each plane it sells. Another put the unit cost at $160 million in the third quarter of last year and the sale price at $115 million. The second estimate seems more likely, just because the first one is so hard to believe. Fortunately for Boeing, the highly profitable 737 and 777 planes offset the high discounts Boeing is forced to give on the 787s.

Boeing is able to account for these massive losses by using “program accounting,” which allows the company to book future profits now by spreading out the costs and revenue from the 869 unfilled orders for the 787s on Boeing’s books. In a January report, The Wall Street Journal reckoned that if Boeing used standard accounting it would have reported an operating loss of $69 million in its commercial jet division for the first three quarters of last year.

Boeing calls the gap between what it costs to manufacture a 787 and what the company sells the plane for “deferred production costs” and it projects such costs for the 787 program at $25 billion, which it will have to pay back before the plane is profitable. One analyst sees the shortfall at $35 billion and doesn’t think that the aircraft will be profitable until 2019 after the first 1,000 Dreamliners are delivered. Adding in all the development costs, another analyst figures that Boeing will not recover all its costs on the 787 until it sells at least 1,900 planes.

In order to make the 787s profitable, though, Boeing will have to charge more for the plane, get its manufacturing costs down and take a lot of orders. So far in 2014 the company has just one new net order for a 787.

Boeing estimates that the total market for the 787 over a 20-year period to 2030 is 3,500 planes, of which it expects to sell more than half. The company has taken orders for 1,031 of the planes and delivered 162, including the first — and so far only — 787-9. Boeing will have to step up its game if it not only wants to sell as many planes as it expects but also if it wants to make a profit on the sales.