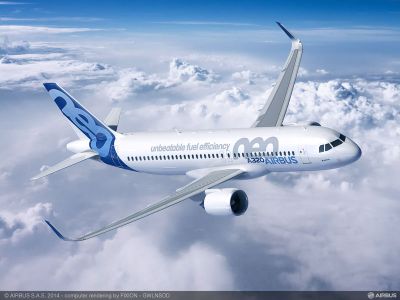 Source: Airbus Group NV
For those of you keeping score at home, the order tally so far shows Airbus with about $21 billion in new orders after one day’s gamesmanship at the Farnborough International Airshow. Boeing Co. (NYSE: BA) trails with around $7.7 billion in sales for the opening day, but the company is hoping for a strong comeback on Tuesday, day two of this week-long match.

Boeing Tuesday morning announced an order for 26 planes. Air Lease Corp. (NYSE: AL) confirmed a previous order for 20 of Boeing’s new 737 MAX 8 aircraft and added an order for six of the company’s 777-300ER. The total value of the order is $3.9 billion at list prices.

A second airplane leasing firm, Connecticut-based Intrepid Aviation, placed an order for six Boeing 777-300 ERs. At a list price of $320 million per plane, the order is valued at $1.9 billion.

Airbus is not sitting on its hands either. The European aircraft maker announced an order Tuesday morning for 115 of its A320 single-aisle jets from Dublin-based leasing firm SMBC Aviation Capital. Of the total, five of the planes will be current A320s and 110 will be the new A320neo. At list prices the order is worth around $11.7 billion.

Boeing does not appear to be making up any ground on Airbus yet this morning. With the new order from Ireland, Airbus can boast of nearly $33 billion in new orders, compared with $13.5 billion in new Boeing orders.

Airbus CEO John Leahy even leads in the quotable quote department. Leeham News cites this zinger from Leahy, “The only way a passenger will know he’s not on a 787 is that the seats will be bigger.”