787 Dreamliner Engine Fails Over the Atlantic 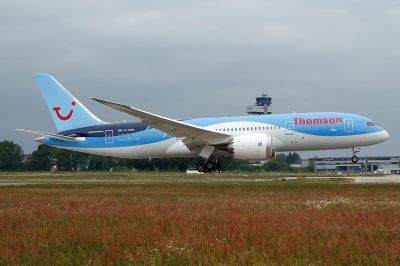 Source: Thomson Airways Boeing 787 G-TUIB" by Björn from Niedersachsen /lower saxony - IMG_6739Uploaded by russavia. Licensed under Creative Commons Attribution-Share Alike 2.0 via Wikimedia Commons
The pilot of a 787 Dreamliner was forced to shut down one of the plane’s two engines about one and a half hours into a scheduled nine-and-a-half hour flight from the Dominican Republic to Manchester, England. The plane, one of six 787-800s owned by Thomson Airways, made a safe emergency landing  in the Azores about four hours after the engine was shut down.

No explanation has been offered yet for the sudden engine failure, but this is a first for the aircraft since The Boeing Co. (NYSE: BA) delivered its first 787 in the fall of 2011. The plane entered production about four years late and cost the company about five-times the original $6 billion estimate. Thomson Airways was Boeing’s U.K. launch customer and received its first 787 in June of 2013.

The first major issue with the plane was a delamination of the composite skin on the plane’s fuselage. A more spectacular problem arose when a battery pack in a parked 787-800 ignited. The problems with the lithium-ion batteries appears to have been sorted out, but it caused a three-month ban on all 787 flights in early 2013.

The General Electric Co. (NYSE: GE) built the GEnx-1B engines that are used on the Thomson 787-800 fleet. A different version of the engine, the GEnx-2B, is also used on Boeing’s latest version of its 747-8 jumbo jet. A series of incidents involving both engines caused the National Transportation Safety Board to have all the engines inspected in October of 2012.

While the engine loss gave the passengers a fright — one little girl asked her parents, “What if we don’t make it?” — modern airplane engines installed on two-engine planes like the 787 are designed to be able to complete their full flight from any point on the flight plan with just one operating engine. We’re sure that doesn’t make a passenger’s experience any less terrifying.