Boeing 747 Production Will Fall to One a Month 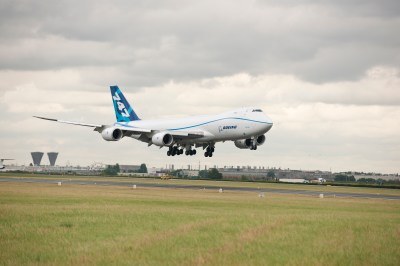 Source: Courtesy of Boeing Co.
Beginning in 2016, Boeing Co. (NYSE: BA) plans to cut production of its 747 jet to just one a month from a current rate of about 1.5 per month. In April of 2013, the company announced a cut from two planes a month to 1.75, and further cuts will culminate in a rate of 1.3 per month beginning in September and lasting until the one-per-month rate takes effect.

Boeing took an order for 20 freighter versions of the plane (747-F) at the recent Paris Air Show, but that order has not been confirmed, and delivery totals and schedule remain unclear. Boeing continues to believe that it can build a market for the 747-F, and incoming president Dennis Muilenburg said last month that a production rate of one per month for the plane is still profitable for the company.

Profitable, maybe, but short-lived nonetheless, it appears. The latest 747 passenger jet competes against the Airbus A380 for a small part of the global commercial fleet. The A380 can carry as many as 555 passengers, nearly 90 more than the 747-8. Dual-engine planes like Boeing’s 787 and the Airbus A350 are more economical on many of the routes that the 747 was originally designed to fly, and the A380 is more economical than the 747 on the longest routes.

ALSO READ: Will Boeing Be Able to Replace an Icon?

Even as a freighter, the 747 faces a steep climb. Since reaching a peak available freight load factor of more than 50% in 2010, the number has dropped to around 45% this year, according to the International Air Transport Association’s (IATA) latest data. As more dual-engine passenger jets are added to commercial fleets, airlines have begun to carry more freight on passenger flights, further reducing demand for dedicated freight aircraft.

In its most recent 20-year world air cargo forecast, Boeing saw demand rising from a global fleet of 1,690 freighters in 2013 to 2,730 freighters in 2033. In terms of deliveries, 590 of 2,170 freighters to be delivered to customers over the period were large production planes, a category that includes the 747. Over 20 years that averages out to 29.5 planes annually, which strikes us as optimistic.

A report in The Wall Street Journal also noted that 747 buyers are some of the largest customers of the U.S. Export-Import Bank, which very likely will close its doors at the end of June. The shutdown may only last a month because legislation re-authorizing the Ex-Im bank is likely to be attached to the “must-pass” federal highway bill.