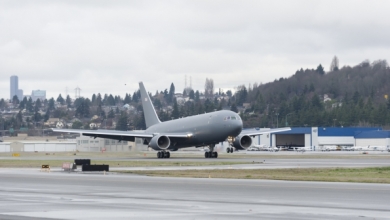 Source: The Boeing Co.
After taking a $835 million pre-tax,second-quarter charge on its new KC-46A tanker program and just a few weeks before the plane’s first scheduled test flight, The Boeing Co. (NYSE: BA) has run into another snag with the new plane.

The test plane which is the company’s first to be equipped with a working air refueling system was damaged when a mislabeled chemical was used to test the fuel system. The chemical corroded and damaged the fuel system according to a report at The Seattle Times, and the fuel boom and auxiliary fuel tanks have been removed for inspection and repairs.

The first test flight of the new tanker was scheduled for late August or early September and it is not known how long this most recent incident will delay that flight. The U.S. Air Force, which expects to receive the first 18 of an order for 179 of the planes by August 2017, has been informed of the issue.

Even before this incident occurred the delivery schedule had grown very tight due to other problems with the plane. On a pre-tax basis the company has so far taken accounting charges of $1.26 billion on the program.

One part of Boeing’s response has been to name a new executive to oversee the program. Scott Fancher has been named a senior vice president and given responsibility for the KC-46A. Fancher has previously gotten the 787 Dreamliner program back on track and then been assigned to oversee the 777X program.

In a report from the Government Accountability Office (GAO) published last April, agency officials outlined the scheduling issues Boeing faced at that time:

With [U.S. Air Force] program office approval, Boeing restructured its nearly 2,400 development flight test hour plan to focus on demonstrating key KC-46 aerial refueling capabilities required for the production decision. Significantly less testing will now be conducted prior to the decision and only three test months will be on a KC-46, compared to the original plan of 13 months. This testing is intended to demonstrate design maturity and fix design and performance problems before a system enters production. Boeing remains at risk of not being able to demonstrate the aerial refueling capabilities in time to meet the new production decision date due to late parts deliveries, software defects, and flight test cycle assumptions, which could result in additional delays.

Now we can add a fouled fuel system to the litany of problems Boeing is having with the new tanker.

ALSO READ: 9 States with the Most Dangerous Weather