9 States With the Most Dangerous Weather 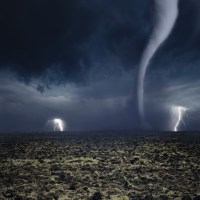 Source: Thinkstock
Despite a historically slow start to tornado season in 2015, more than 400 tornadoes were reported in May alone, roughly double the average in recent years. May was also the second most active tornado month since 1950. While some states are more susceptible to violent weather than others, all states could be struck by a natural disaster at any time.

Using data from the National Weather Service (NWS), 24/7 Wall St. reviewed weather-related fatalities from 2010 through 2014. Nationally, 2,950 people died from natural disasters over that time, or fewer than two people per million residents in each of the five years reviewed. In Alabama, 12 people died per one million residents over that time, the most of any state. These are the states with the most dangerous weather.

Click here to see the states with the most dangerous weather.

Tornadoes are some of the most fatal natural disasters. From 2010 through 2014, twisters killed 723 people nationally, or 25% of all weather-related deaths. Oklahoma, the state with the seventh most weather-related fatalities, lies in the heart of Tornado Alley, which runs north from Texas to North Dakota and is the most active tornado region in the world. At least 57 Oklahomans died from tornadoes from 2010 through 2014, 49 of them in 2013 alone.

States outside of Tornado Alley are also susceptible to twisters. Alabama, the state with by far the most weather-related fatalities over the period reviewed, was hit in 2011 with 62 tornadoes in a single day, killing 250 people and causing roughly $3 billion in insured losses. This was the second most costly tornado in U.S. history.

Extreme temperatures — both hot and cold — are another major contributor to weather-related fatalities across the country. Nationally, nearly 600 people died from heat stroke over the five-year period reviewed. Nevada, the majority of which is covered in desert, accounted for a substantial share of heat-related deaths across the country.

Flooding can also cause many fatalities. Flooding particularly impacts northern states such as Wyoming and Montana, where warmer spring temperatures can cause snow to melt faster and overrun riverbanks and levees. Heavy rainfall can also cause floods.

In addition to being deadly, natural disasters are also responsible for billions of dollars in crop and property damage each year. From 2010 through 2014, severe weather resulted in more than $93 billion of damage, the bulk of which was to properties.

In each year from 2010 through 2014, fewer than 600 people died as a result of severe weather. Often, a single, extremely deadly storm can have an outsized effect on a state’s weather-related fatality rate. This was likely the case in Tennessee and Mississippi, which were each hit hard by a single storm over that time, despite having relatively few weather-related deaths during most of the period.

To determine the states with the most dangerous weather, 24/7 Wall St. compiled data from the National Weather Service on total weather-related fatalities for each year from 2010 through 2014. Because many of the numbers are small and susceptible to large fluctuations, our rank is based on the annual average number of weather-related deaths over the five-year period reviewed. Using population figures from the U.S. Census Bureau, we calculated severe weather fatalities per 1 million residents. Also from the National Weather Service we reviewed the total value of damage caused by natural disasters, as well as breakdowns of the kind of weather responsible for the death: extreme temperature, flooding, lightening, tornados, wind, and winter storms.

These are the nine states with the most dangerous weather.