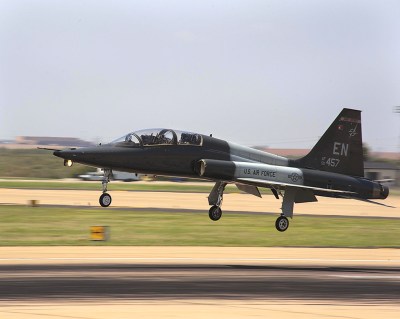 Source: U.S. Air Force
In a contract announcement on Tuesday, the U.S. Department of Defense and the U.S. Air Force announced a multiple-award contract with a ceiling of $20.9 billion for Air Force Training Systems. The contract is an indefinite-delivery/indefinite-quantity contract for the Training Systems Acquisition (TSA) III program and includes 25 companies ranging from top defense contractors to small businesses.

Each of the contractors will receive $1,000 at the time of the award for the 2015 fiscal year. Additional funding will be assigned on individual task orders.

This contract does not include a program to upgrade the Air Force’s training jet, the venerable T-38. Upgrading the fleet of training planes did not make the Air Force’s list of its top three projects. Those are the F-35A fighter plane from Lockheed Martin, the KC-46A tanker from Boeing and the Long-Range Strike Bomber (the B-3). A contract for 80 to 100 B-3s costing around $550 million each is expected soon. There are two competing bids for the B-3, a team led by Northrop Grumman and another led by Boeing and including Lockheed Martin.