Rockwell Collins Inc. (NYSE: COL) announced Sunday that it has agreed to acquire aircraft interior manufacturer B/E Aerospace Inc. (NYSE: BEAV) for $6.4 billion in cash and stock plus the assumption of $1.9 billion in B/E debt in a deal with a total price tag of $8.3 billion. As we might expect, that announcement has pushed Rockwell’s fourth quarter and full-year 2016 results off the front page.

In its initial guidance statement for fiscal year 2017, Rockwell said it expects revenue in its existing businesses, not including any effect from the proposed B/E acquisition, to come in at $5.3 billion to $5.4 billion, with free cash flow of $600 million to $700 million. Free cash flow in 2016 totaled $530 million. The guidance is based on the following assumptions:

As a graphic at Rockwell’s website highlights, the two companies have complementary businesses: Rockwell has focused primarily on electronics systems primarily cockpit-related while B/E is primarily a supplier of cabin interiors.

Anyone watching the aerospace industry even moderately closely is aware of the difficulties facing the cabin interiors suppliers. The poster child for this problem is Zodiac Aerospace, the French company that cannot supply enough interiors to Airbus for its A320neo and the wide-body A350. Airbus won’t even consider Zodiac as an interior supplier for the new A330neo program.

Here’s an illustration provided by Rockwell on the two companies’ strengths. Note that there is little overlap, indicating that synergies are not likely to be very large. 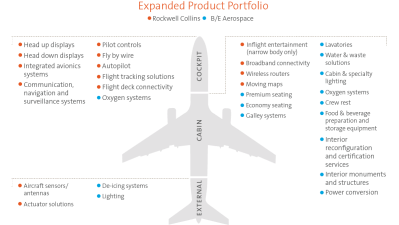 But the bigger problem for cabin interior suppliers are demands from aircraft makers like Airbus and Boeing Co. (NYSE: BA) to lower their prices. Boeing has been putting the squeeze on suppliers for months now. As Scott Hamilton at Leeham News points out, both Airbus and Boeing also have been reducing the number of suppliers for their interiors in an effort to simplify production and to try to wring out the best price the makers can get by offering bigger contracts.