Boeing Co. (NYSE: BA) has painted a portion of the tarmac at Lambert Field in St. Louis to resemble the flight deck of an aircraft carrier as it begins testing a prototype of its unmanned aerial vehicle (UAV) that is competing for a U.S. Navy contract for an unmanned carrier-based refueling tanker. The Navy program, called MQ-25 Stingray, issued requests for proposals last October and expects to choose a vendor by September of this year.

Competing against Boeing are Lockheed Martin Corp. (NYSE: LMT) and privately held General Atomics Aeronautical Systems. Northrop Grumman Corp. (NYSE: NOC) pulled out of the bidding in late October saying it would not be able to meet the Navy’s contract terms.

Aviation Week reports that it has viewed a video of the huge drone “taxiing around the runway during daylight hours on its own power.” The drone “stops, starts, moves forward and hooks into position behind the catapult, prepared for launch.”

The refueling drone is being designed for in-flight refueling of carrier-based fighter planes, and the drone must be capable of operating from a carrier as well. The Stingray program was conceived originally as a stealthy drone capable of multiple missions and has been gradually winnowed to a refueling tanker. An additional contract requirement is that the drone tanker use existing aerial refueling systems to cut down on project development time, cost and risk.

Boeing’s aircraft was first unveiled last December. According to Boeing, the threshold requirement for the unmanned tanker is offloading 14,000 pounds of fuel to an aircraft flying 500 nautical miles from the carrier. The Navy currently uses manned strike aircraft that have been modified to serve as refueling planes. The drone is not a stealth-capable vehicle, and the contract does not include any survivability requirements. The Navy has not yet indicated how many of these tankers it plans to purchase.

The MQ-25 must be capable of refueling the Navy’s F/A-18 Super Hornet and the EA-18G Growler (both Boeing aircraft) and the F-35C Joint Strike Fighter from Lockheed Martin.

The drone has not yet flown, but Boeing expects to have the UAV in the air before the contract award date. Here’s a photo of the aircraft taken at Lambert Field and provided by Boeing. 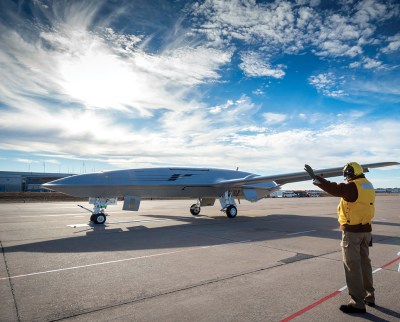