The U.S. Navy on Thursday awarded a contract to The Boeing Co. (NYSE: BA) to design, build and deliver four MQ-25A unmanned air vehicles (drones) that will serve as refueling tankers for Navy carrier air wings. The initial contract award totals $805 million and $79 million is being paid out of the Navy’s fiscal year 2018 budget.

The potential value of the contract is much larger. According to a report at Breaking Defense, the drone tanker program, known as Stingray, is expected to be worth $13 billion by the time Boeing builds all 72 drones in the proposed fleet. As we noted in March, the Navy’s requirements include being able to deliver 14,000 pounds of fuel at distances of up to 500 miles from an aircraft carrier.

This is an historic day. We will look back on this day and recognize that this event represents a dramatic shift in the way we define warfighting requirements, work with industry, integrate unmanned and manned aircraft, and improve the lethality of the air wing.

As a company, we made an investment in both our team and in an unmanned aircraft system that meets the U.S. Navy’s refueling requirements. The fact that we’re already preparing for first flight is thanks to an outstanding team who understands the Navy and their need to have this important asset on carrier decks around the world.

The drone’s ability to extend the range of carrier-based aircraft means that the carriers themselves (which now cost about $13 billion apiece) can stay out of range of most of China’s anti-ship missiles threatening the South China Sea and the Sea of Japan.

Both General Atomics and Lockheed Martin bid on the drone tanker contract, but only Boeing built a complete prototype that the company has been testing on a St. Louis-area runway painted with the outline of a carrier deck.

Other military requirements for the Stingray tanker include the ability to use existing aerial refueling systems and operate with carriers’ catapult launching and arrested landing systems.

Here’s a photo of the Boeing prototype: 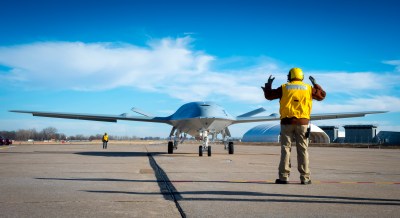 Source: The Boeing Co.
Get Our Free Investment Newsletter