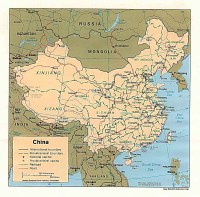 Chinese buyers are projected to have purchased up to 18 million cars in 2010, more cars than have ever been sold in one country in one year. Those cars represent a year-over-year growth rate of 32%.

Going into 2011, Chinese buyers are expected to buy around 20 million new vehicles, a growth rate of about 10%, according to the China Association of Automobile Manufacturers cited in The Wall Street Journal.

General Motors Co. (NYSE: GM) sold a record 2.35 million vehicles in China in 2010, and the company’s president of China operations expects 2011 growth of 10%-15%, according to People’s Daily.  Ford Motor Co. has not released a forecast for 2011 sales yet, but it is probably encouraged by sales growth of 39% for the first ten months of 2010. But the overall pace for all auto sales slowed somewhat in the last two months of the year, from a blistering 36% January through October to 32% for the full year.
Toyota Motor Co. (NYSE: TM) is expecting Chinese sales to grow 13% in 2011, to 900,000 vehicles. Volkswagen AG is expecting up to 15% growth as well in 2011. Honda Motor Co. (NYSE: HMC) projects sales of 730,000 cars in China in 2011, up from about 650,000 this year.
The expected 50% in the growth rate is attributed to the elimination of a tax incentive on small-engine cars, although a $450/vehicle subsidy remains in place. Another drag on sales is a restriction on the number of new license plates that will be available in Beijing. In 2010, the city issued more than 700,000 new plates — in 2011, the authorized number is just 240,000. Other congested cities in China could adopt similar cuts.
The government has also recently raised gasoline prices to around $4/gallon, and that too could influence buyers. Still, GM and Ford and the others are all looking to Asia, particularly China and India, for sales growth. US sales are improving, but lag behind Chinese sales by nearly 5 million units.
The torrid pace of auto sales in China for the past two years couldn’t go on forever. And it looks like 2011 will be the year to that puts an end to the explosion.
Paul Ausick