The Cars Americans Will Not Buy 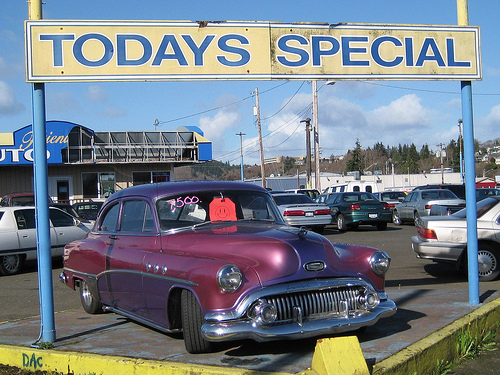 April car sales data are out, and they are not cause for celebration. Though sales are up 2% overall from last April, they have cooled somewhat since the February and March run. There are a few winners, however, including Toyota (NYSE: TM), Chrysler and several European auto makers, some of which are up over 20%. Meanwhile, General Motors (NYSE: GM) and Ford (NYSE: F) are down.

Read The Cars Americans Will Not Buy

While a few brands are doing incredibly well, dealers cannot even give away some models. “Days to turn,” or “days on the lot,” reflects the average number of days a vehicle is in dealer inventory before it is sold. All of the car models on our list spent more than 90 days on the lot, considerably longer than the 52-day average. Working with Edmunds.com, 24/7 Wall St. identified 10 cars that Americans are not buying.

Not surprisingly, time on the lot appears to be an excellent proxy for how vehicles are selling. The average car sold in America sold 35,593 units in 2011, according to Edmunds. Eight of the cars on this list sold less than that. Five sold less than 15,000 units last year.

In addition to having poor sales last year, overall sales of seven of the 10 dropped between 2009 and 2011. Total sales of five cars plummeted more than 30%. Two of the cars on this list, the DTS and the Honda Element, have been discontinued, and several more may be in jeopardy.

It is not always clear what makes a car unpopular. The cars on the list are all different types, from pickup trucks to compacts. They are also made by a number of different manufacturers, although six are made in Japan.

Fuel efficiency, on the other hand, appears to be a major factor for these cars’ poor sales. As the price of gas climbs to $4 per gallon, Americans appear to be making more fuel-efficient choices for their family vehicle. Six of the vehicles on the list have combined gas mileage — city and highway — of 25 MPG or less. According to the EPA, the Nissan Titan, which has among the longest days on lot, gets just 15 combined MPG.

Even when these cars belong to categories that generally get poor gas mileage, such as SUVs and pickups, they are still among the worst in their class. The Cadillac DTS, for example, gets a combined 18 MPG. By comparison, the Honda Accord, another full-size sedan, averages 27 combined MPG.

Based on car reviews, poor quality appears to be hurting sales of the cars on our list as well. JD Power reviewed eight of the 10 models on our list. Only one car scored better than a 3 out of 5 in both “overall quality and design” and “initial quality” — considered only passable scores. Three models on this list only scored a 2 out of 5 in initial quality.

24/7 Wall St. obtained days-to-turn data for the full year 2011 provided by auto industry analytics organization Edmunds. To avoid inconsistencies that can arise from small data sets, we only looked at vehicles that sold at least 10,000 units in 2011. We also looked at the list prices of these vehicles as provided by the dealer, fuel efficiency data from the U.S. EPA, and quality ratings provided by JD Power & Associates and Consumer Reports. Edmunds also provided sales figures going back to 2006. All unit sales listed are U.S. only.

These are the cars Americans will not buy.