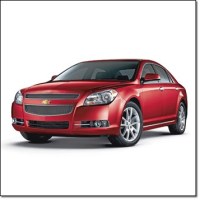 U.S. automaker General Motors Co. (NYSE: GM) said today that it is recalling 426,240 U.S. vehicles to fix a problem with the cars’ transmissions. The affected models are Chevrolet Malibu, Pontiac G6 and Saturn Aura built between 2007 and 2010.

The recall will also affect 40,029 vehicles in Canada and 7,572 in other markets around the world.

The problem affects cars with four-speed automatic transmissions. The transmission shifter may indicate that the car is in Park, but the gearbox may not match the indicated position, causing the car to roll. The company said it is aware of four crashes related to the problem, but that none has caused an injury.

GM said it will fix the issue by adding a reinforcement to the end of the shift cable to prevent the part from breaking.

The company is also recalling 6,475 Chevrolet Sonic subcompacts to repair a faulty turn-signal bulb. GM said it knows of no accidents related to this problem.