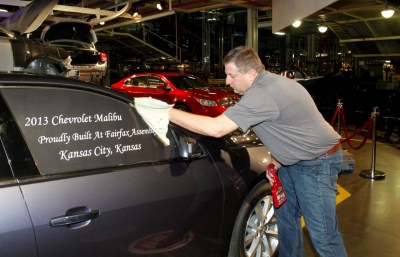 Source: Courtesy General Motors Co.
General Motors Coo. (NYSE: GM) discussed its present situation in China and pointed to its future plans. GM has been the leading car company in China for eight years, based on its own sales numbers.

GM management also pressed the point that China is the world’s largest car market and that it will expand rapidly this year. The optimism does not acknowledge that air pollution could cause the government to slow car purchasing, or the Chinese economy could shift into a period of slow growth.

“We are at an important point in our history and the industry’s history in China,” said Bob Socia, President, GM China, and Chief Country Operations Officer, China, India and ASEAN. “Last year, the vehicle market reached a record 19.4 million units. We expect industry sales to grow another 7-8 percent in 2013.”

China’s car sales moved ahead of those of the United States, the perennial number one during the recession. The increase in the People’s Republic was based to some extent by national tax credits that no longer exist. GM believes that this lack of stimulus can be overcome by a large number of new models, which will drive production growth and a increase in the number of its dealers.

GM and its joint ventures are adding to their product lineups by launching 17 new and upgraded models in China this year. They include the Chevrolet Cruze hatchback; the new Wuling Sunshine; two new Jiefang light-duty trucks, the S230 and F330; and the Insignia Sports Tourer, Zafira Tourer and Astra GTC from Opel.

“Our focus is on luxury vehicles and SUVs going forward,” said Socia. “Not long ago, both were considered niche segments. Both are now mainstream and growing rapidly.”

GM is in the process of bringing Cadillac’s entire global portfolio to China, adding one locally produced model per year through 2016. Earlier this year, it introduced the locally produced XTS luxury sedan as well as the refreshed SRX luxury SUV, which is Cadillac’s best-selling model in China.

One reason GM’s plan may be a struggle is its direct competition with Volkswagen, the other highly successful car company in China, as well as the efforts of other global car companies, particularly Ford Motor Co. (NYSE: F), Toyota Motor Corp. (NYSE: TM) and several luxury car manufacturers such as BMW, Mercedes and Audi, to add to their market shares.

The wild card in Chinese car sales is a growing concern about the effects of air pollution, particularly as a health hazard. When the problem is great enough in some large cities, driving is prohibited or restricted as some times of the day. The problem will get worse, so the restrictions would become a threat to new car sales.