Source: Thinkstock
One reason that U.S. drivers are buying less gasoline is that new cars get better gas mileage. The University of Michigan’s Transportation Research Institute has tracked new car sales and fuel economy since October 2007, and the institute’s July report shows that fuel economy has improved from an average of 20.8 sales-weighted miles per gallon (mpg) to a record high of 24.8 mpg in July 2013. The ties the sales-weighted average for March, April and May of this year, and it is an improvement of nearly 19% since October 2007. 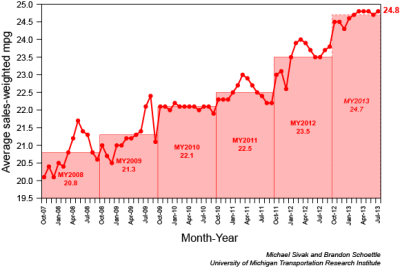 The data is based on the window-sticker mpg ratings published by the U.S. Environmental Protection Agency for the various models sold. The Michigan study does not report sales by brand or model, but by combining manufacturers’ sales reports and EPA fuel economy data, we can get an idea of how important fuel economy is to new car buyers and to manufacturers. We have excluded all-electric and plug-in hybrids.

General Motors Co.’s (NYSE: GM) most fuel-efficient car is the Chevrolet Spark, with a fuel-economy rating of 34 mpg. GM only sold 3,800 Sparks in July, compared with sales of more than 42,000 for its Silverado pickups. The best mileage for any Silverado is 21 mpg. In 2007, GM did not make a Spark, the Silverado got 19 mpg and the best fuel economy rating for a GM car went to the Chevy Aveo with 30 mpg.

Toyota Motor Corp.’s (NYSE: TM) most fuel-efficient cars are the Prius and Prius c models, with combined fuel efficiency ratings of 50 mpg. Toyota sold more than 23,000 Prius models in July, third in company sales behind the ever-popular Camry and Corolla models, which sold nearly 35,000 units and 24,000 units, respectively. A Camry hybrid gets 41 mpg and a non-hybrid gets 28 mpg. The most fuel-efficient Corolla Matrix also gets 30 mpg. In 2007, a Prius got an EPA rating of 55 mpg and a Camry Solara posted a rating of 28.

Honda Motor Co. Ltd.’s (NYSE: HMC) most fuel efficient vehicle is the Civic hybrid, with a combined EPA economy rating of 44 mpg. All models of the Civic are also Honda’s best-selling cars in the United States. In 2007, a Honda Civic hybrid’s EPA combined mileage rating was 50 mpg.

For Ford and GM, increasing the fuel-economy ratings on their light trucks — which are the companies’ best sellers — probably made a bigger difference to their fleet economy ratings than anything else they could have done.

At Toyota and Honda, increasing the fuel-economy ratings on their already-efficient models appears to have been the focus.

U.S. drivers are driving fewer miles, using less fuel and emitting 19% less pollutants than in 2007, as the following chart from the University of Michigan illustrates. Perhaps old dogs can learn new tricks. 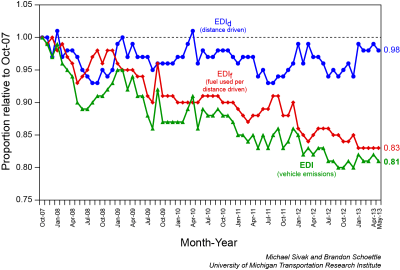