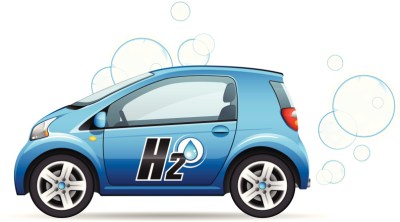 Source: Thinkstock
In an interview in Tokyo on Wednesday, Toyota Motor Corp. (NYSE: TM) said it expects to unveil a hydrogen fuel cell car at next month’s Tokyo Auto Show and have the car available for sale in Japan, Europe and the United States by early next year as a 2015 model year vehicle. The company has been working on the car for several years, along with competitors like Honda Motor Co. Ltd. (NYSE: HMC), General Motors Co. (NYSE: GM), Daimler, Hyundai Motor and BMW, which is working with Toyota on a fuel cell vehicle for introduction around 2020.

The car’s fuel cell converts hydrogen to electricity and emits only water vapor, and the driving range is similar to that of a gasoline-powered car. A Toyota mid-size Highlander SUV equipped with a fuel cell engine achieved 68.3 miles per kilogram of hydrogen in a test in 2009. A similar vehicle with a hybrid engine gets an EPA-rated 26 miles per gallon. A kilogram of hydrogen is roughly equivalent to a gallon of gasoline, indicating that the fuel cell’s mileage was about 2.6 times better than the hybrid’s mileage rating.

If hydrogen can be produced and delivered to fueling stations for about $9 per kilogram, that would be equivalent to a gasoline price of around $3.50 a gallon. Most hydrogen used in the United States is made from natural gas, and a 2009 estimate of the cost making and delivering hydrogen came to $6 to $8 a kilogram. New methods of making hydrogen promise to be cheaper, but all remain experimental. And there is virtually no distribution network. Still, the promise is there.

Toyota’s fuel cell car could sell for around $50,000, which puts it right about at the price point for the basic Model S sedan from Tesla Motors Inc. (NASDAQ: TSLA). Tesla’s CEO Elon Musk is among the skeptics cited by Bloomberg who say that making hydrogen is too complex, too costly and not clean enough. But then, that is what we would expect him to say. For now, it likely is true.

We noted earlier Friday morning that Toyota has dropped the price on its Prius Plug-in Hybrid and that demand for all-electric cars is very skimpy. Alternative-fuel vehicles face a daunting challenge, but they are destined to replace internal combustion gasoline and diesel engines, probably well before the end of this century.

Tesla’s Musk knows that he isn’t competing with gasoline-powered vehicles, but against cars powered by hydrogen or some other alternative fuel made by the likes of Toyota, GM and other big automakers. They can afford to play a long game, and Tesla has to get into a position where it can afford to play too.

This Is The Electric Car With The Longest Range