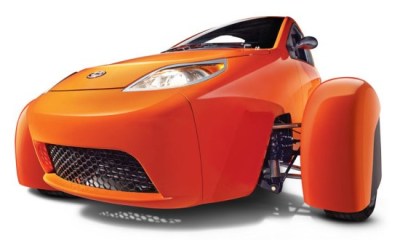 Source: courtesy of Elio Motors
The least expensive cars available in the United States have been the lowest end vehicles from major manufacturers. Most cost a little less than $15,000 and are made for young adults and commuters. The situation has changed. A new American made car will sell for only $6,800.

Elio has started to take orders for a car that gets 84 MPG through a tiny gasoline powered three-cylinder motor. Elio claims the vehicle is manufactured to the “highest safety standards.” Its size and weight may make that distinction of little value.

The car is a just a slow-speed computer. It can reach 100 MPH. And its acceleration to 60 MPH comes in 9.6 seconds — on par with some cars and SUVs powered by small four-cylinder engines.

Elio’s new vehicle does have a few features that would not be expected in a car that is so inexpensive: anti-lock brakes, three airbags and a three-year/36,000 mile warranty. The car does have an odd configuration — just three wheels, which helps keep its weight to 1,200 pounds.

Elio may not sell many of these strange cars, but no matter how it does in the short term, its manufacturing operation will create 1,500 jobs. The company’s management has cleverly set up a partnership with auto parts supply company Pep Boys — Manny, Moe & Jack (NYSE: PBY), which gives it a nationwide service operation.

The test for the demand of the car will happen shortly. Potential customers can reserve a “place in line” for $100 to get one of the tiny vehicles, which will be available next year. Whether what they get is safe to drive is another matter.