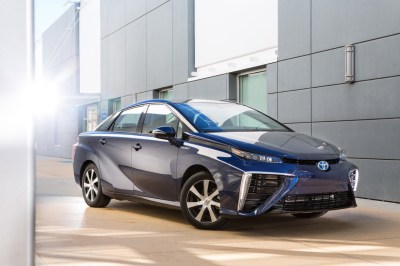 Source: Toyota Motor Corp.
Toyota Motor Corp. (NYSE: TM) on Monday introduced its mid-sized, fuel-cell powered Mirai in Torrance, Calif., ahead of the public opening of the Los Angeles Auto Show, scheduled for Thursday, November 20th. The company said the four-door sedan will sell for $57,500 or be available on a 36-month lease with monthly payments of $499 and an initial payment of $3,649.

The purchase price can be offset in some states by up to $13,000 in combined federal and state incentives. The only catch is finding a fueling station for the vehicle. Toyota plans to begin selling the car in California in the fall of next year and expects to have 19 fueling stations available with at least 100 available within 10 years. Toyota is helping finance the first batch, and the state of California has committed up to $200 million to help build the first hundred or so stations.

This is not a particularly opportune moment for the Toyota Mirai to hit the market. It will compete with electric vehicles that are getting cheaper, like the Model X and Model 3 from Tesla Motors Inc. (NYSE: TSLA), as well as lower gasoline prices, which may be the biggest threat of all in the near term.

The Mirai holds 5 kilograms of compressed hydrogen that costs about $10 per kilo. The car can travel about 300 miles on a full tank of fuel. A mid-size, four-cylinder 2014 Toyota Camry gets combined city/highway mileage of 28 mpg, according to the U.S. Environmental Protection Agency. At the current gasoline price of around $2.86 per gallon, the fuel cost for the Camry to travel 300 miles would be about $33, compared with $50 for the fuel-cell powered Mirai.

While gasoline prices are virtually guaranteed to rise above $3 a gallon again over the lifetime of the car, a car buyer may still have no reason to pay more than twice as much (after incentives!) for a Mirai rather than a Camry. In fact, gasoline prices would need to top $5 a gallon to make the fuel costs break even. And even then the purchase price difference remains.

These are steep hills for a new car to climb, but Toyota’s Prius and Tesla’s Model S have both succeeded at selling greener cars, even if the sales totals are modest. Toyota said it will build 700 of the fuel-cell cars in 2015 and ramp up annual production to the tens of thousands in the 2020s. With total new car sales over 85 million globally, the impact of the car’s zero-emissions footprint is very limited.

Toyota and rival Honda Motor Co. Ltd. (NYSE: HMC) have both staked some big money on fuel cell technology. Toyota recently sold a portion of its stake in Tesla and had already phased out a 2010 agreement under which Tesla supplied battery packs for Toyota’s RAV4 electric vehicle. Toyota has decided that fuel cells, not batteries, are where future profits lie. It will take a while to find out if the company is right.