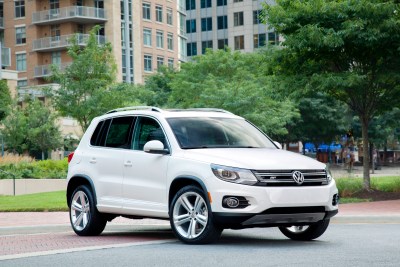 Source: Volkswagen Group of America
Volkswagen’s parent has released its sales delivery figures for 2014, and it was all China. While the company delivered 10 million cars and light trucks, more than a third of those — 3.7 million — were in the world’s largest market — China.

VW has been the leader in sales in China for years, rivaled by General Motors Co. (NYSE: GM). As other global manufacturers turn to the People’s Republic, which replaced the United States as the world’s largest four years ago, each finds that substantial gains are difficult because of the strength of the two leaders.

The Volkswagen Group achieved the first goal of its Strategy 2018 last year: “In 2014, our Group delivered over ten million vehicles in total to customers, ranging from the e-up! city car to heavy commercial vehicles. That is impressive confirmation we are vigorously implementing our Strategy 2018 despite challenging market conditions. We are also making good progress with our other main goals — return on sales, customer satisfaction and top employer”, the Chairman of the Board of Management of Volkswagen Aktiengesellschaft, Prof. Dr. Martin Winterkorn, said in Detroit on Sunday. In total, 10.14 (prior year: 9.73; +4.2 percent) million vehicles were handed over to customers worldwide from January to December 2014.

The growth from such a large base was just as impressive. The 10 million number puts VW in a horse race with GM and Toyota Motor Corp. (NYSE: TM) to be the biggest manufacturer in the world based on unit sales.

ALSO READ: Will Subaru Outsell Volkswagen in the U.S. in 2015?

The company offered specifics about China:

Volkswagen Group China set a new record for China’s auto industry: With its two Chinese Joint Ventures, Shanghai Volkswagen and FAW-Volkswagen, the Group delivered 3.68 million cars (2013: 3.27 million) in 2014 to customers in the Chinese mainland and Hongkong, realizing growth of 12.4 per cent. Prof. Dr. Jochem Heizmann, Member of the Board of Management of Volkswagen Group as well as President and CEO of Volkswagen Group China, stated: “We have achieved another record year with double-digit growth that outpaced the general market. This is a great testament to the hard work of our employees and the quality of our products. Through our strong commitment to sustainability, we have set our goal to shape a greener future in the years ahead.”

VW’s Achilles’ heel remains the U.S. market, where it has a tiny market share, which some experts believe will shrink next year. It has too few models to compete against companies with large and varied offerings.

VW posted good news, with the United States being the sole exception.

ALSO READ: U.S. and China Are Top Markets for Mercedes-Benz