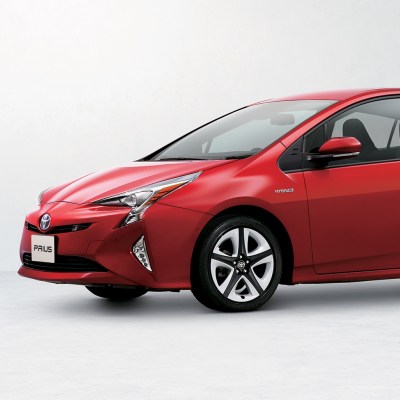 Source: courtesy of Toyota Motor Corp.
Total car and light truck sales reached 1,522,144 in July. By contrast, hybrid sales were less than modest at 32,633. Of those, 9,930 were the base version of the Toyota Motor Corp. (NYSE: TM) Prius, twice the sales rate of any other hybrid.

According to the Hybridcars July Dashboard:

Battery electric vehicle sales were flat from June with strong sales of the BMW i3 offsetting the normal declines in the Tesla products which generally surge in the last month of the quarter and decline in the month following. Tesla sales were stronger than normal in July because an above average number of vehicles were in transit in June and sold in July. The Nissan Leaf continues to struggle. Even with the strong July, Tesla sales are behind their goals and sales will have to increase significantly for the rest of the year in order to meet their stated expectations. Year-to-date, the share of sales relative to total sales is consistent with last year at 0.42 percent. However, the July share is at a much higher level at 0.51 percent (which was consistent with June).

The results of the data have to be discouraging to the auto companies which rely on hybrid sales, or hope to in the future. There an army of tradition hybrids, of which the Prius, which has sold well over 3 million units worldwide, is the grandfather. Electric cars (not part of the Hybridcars July analysis) , which were first launched as large commercial with the General Motors Co. (NYSE: GM) Chevy Volt, which was first shown to the public in 2008, end up as a colossal failure, particularly because of the huge fanfare when GM launched the car. Shortly after, GM went bankrupt, although as far as anyone knows, the two events were not related.

As Tesla Motor Corp. (NASDAQ: TSLA) has brought the electric car business to the center of the public’s attention, all major manufacturers have decided to chase it. The most effective flank near term may be the BMW i3 and i8,

Two questions come out of the weak state of hybrid sales. The first is that the low price of gas may have hurt demand. The other, and more sinister, is that the public will never warn to hybrids at all. More efficient gas engines may support the second case.

Karma Automotive to Introduce New Name for Sedans, No Cars Yet Though

Does Change at the Top Turn Down the Heat on Nikola?