What does it take for a car brand to be appealing to consumers? Acceleration? A luxurious interior? The quality of the seats? Consumers view car brands very differently, based on their own tastes and preferences. A major piece of recent research showed one brand has barely any appeal at all.

Car industry research leader J.D. Power has just released its 2019 Automotive Performance, Execution and Layout Study report. The study has been done for 24 years. Among the 32 brands considered, Mitsubishi finished dead last. It fell substantially behind the next worst brand, which was Buick. The results are based on 69,000 purchases and leases made between February and May. The respondents were queried 90 days after they had taken delivery of their cars.

J.D. Power rated 77 attributes of new cars to develop a rating scale for each brand, with the highest possible score at 1,000. Cars were separated into two categories, mass market and luxury. The average score for luxury cars was 853. Among mass-market cars, the figure was 818. Mitsubishi’s score was 773, well behind Buick’s 800.

Luxury cars dominated the top end of the list. Porsche was first with a score of 891, well above the two brands that tied for second with scores of 868, BMW and Genesis. All three were on the 24/7 Wall St. list of the best car brands of 2019, which included several other luxury brands as well. 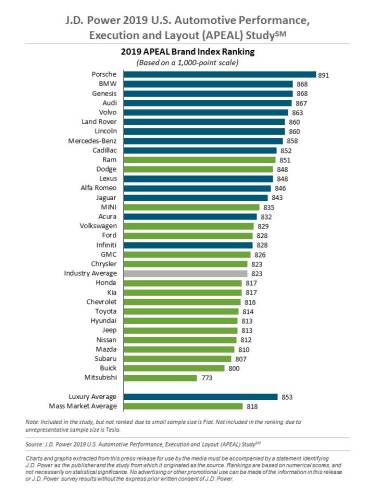 Mitsubishi sells very few cars in the United States. Unit sales through the first six months of 2019 were 71,097, up 5.6% from the same period in 2018. The company makes inexpensive, light, high gas mileage cars and sport utility vehicles with small engines. Most of its models have base prices below $25,000. The competition for buyers of these types of cars and light trucks is fierce. Most large car companies have models that compete directly with Mitsubishi’s.

Mitsubishi has been edging out of the U.S. car market for years. It closed is sole plant in America in 2016. Reuters reported the decision was made “as the Japanese automaker cuts losses on dwindling sales in North America and a strong U.S. dollar, which has stymied returns.”

J.D. Power is not the only research organization that has given Mitsubishi poor marks. Consumer Reports reviews are critical to many buying decisions. Its editors recently looked at the entire product line, and the comments were particularly scathing: “It has a small, uncompetitive product line almost entirely focused now on SUVs. The brand recently added the underwhelming Eclipse Cross. Every one of its models is an also-ran in our road tests, scoring near the bottom of their respective categories. Reliability is mixed, and owner satisfaction is not encouraging.”

J.D. Power experts commented that most brands did well on the new study: “22 of the 32 brands included in the study improved from last year.” Mitsubishi, though, has another problem. It is on the 24/7 Wall St. list of the worst car brands of 2019.

Mitsubishi management won’t be among those celebrating.