It’s sturdy. It’s inexpensive. It only comes in four-wheel drive. And it does not have a lot of models. Subaru was the winner of the J.D. Power 2020 U.S. Automotive Brand Loyalty Study, the most widely regarded study of its kind.

The study is based on one question. When you trade a car in, what is the likelihood you would buy the same brand?  For Subaru, the figure was tops in the industry at 60.5%. It is the second year in a row that the small Japanese car company took the honor. Toyota Motor Corp. (NYSE: TM) scored second this year at 60.3%. Honda Motor Co. Ltd. (NYSE: HMC) ranked third at 58.7%, so Japanese car companies swept the top three places.

Luxury cars were measured separately, and Subaru bested the top brand in that category as well. Lexus, the luxury brand of Toyota, ranked first in the luxury category with a loyalty rate of 48.0%. Mercedes ranked second at 47.8%.

Few of the brands in the study have a model line that is less expensive than Subaru’s. The base price of the Imprezza sedan is $18,695. A step up in the model line, the Legacy has a base price of $22,745. The most expensive model is the Ascent, a seven-seat sport utility vehicle at $31,995. Another draw may be that Subaru offers 0% APR financing for as long as 63 months.

At the other end of the loyalty scale, Fiat, which often is poorly reviewed by research firms and the media, had a rate of 10.4%, an extraordinarily low number. The second worst score was for Chrysler, at 14.1%. The third worst, Dodge, had a loyalty rate of 17.8%. All three are owned by the same parent, Fiat Chrysler Automobiles N.V. (NYSE: FCAU).

Methodology: The 2020 U.S. Automotive Brand Loyalty Study calculations are based on transaction data from June 2019 through May 2020 and include all model years traded in. 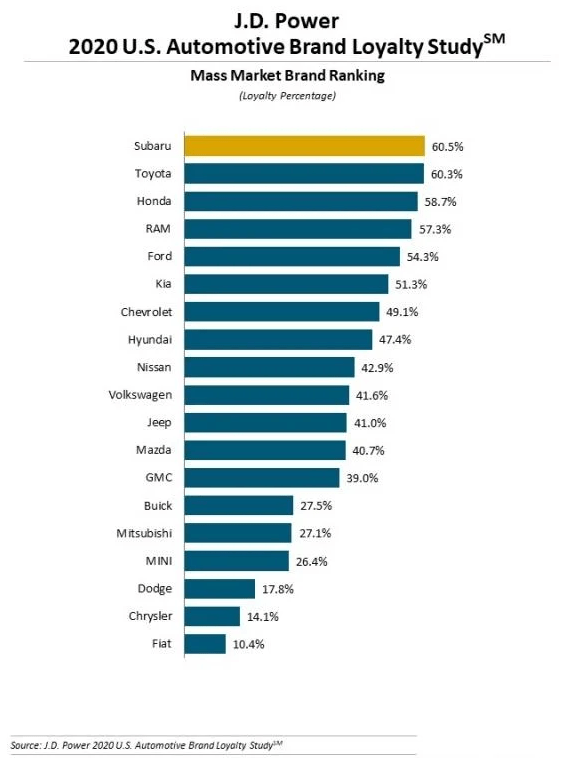