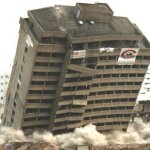 The sell-off is justified. Financial reform has left investors extremely concerned about earnings, particularly the huge fees that come from proprietary trading. New consumer banking laws are likely to undermine many of the fees that are levied on personal banking customers.

The other significant concern about banks are that their balance sheets could deteriorate again. The economy has clearly begun to slow. Real estate prices, both residential and commercial are dropping rapidly. The default rates on home equity loans are likely to be unprecedented as the number of homes that have underwater mortgages moves above 11 million and continues to rise rapidly.

Bank earnings are already likely to be well below what they were in the second half of 2009 and large bank profits emerged from the trough they reached at the peak of the credit crisis.

Whatever optimism emerged when it appeared that the banks had left the best behind them has begun to falter. There is not likely to be another credit crisis, but a write-off and earnings crisis is almost certain.