Cost Of Financial Bailout Almost Too Good To Be True 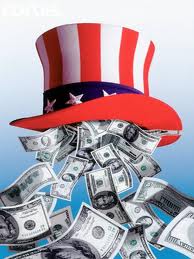 The TARP program is no more. The Treasury Department issued its final report on the cornerstone project meant to save the US financial system from failure. “In light of the recently announced AIG restructuring and when valued at current market prices, Treasury now estimates that the total cost of TARP will be about $50 billion,” the agency said.

It is nearly impossible to imagine a better outcome.

The “Two Year TARP Retrospective” summarized its findings in a short description.

We now have recovered most of the investments we made in the banks.
Taxpayers will likely earn a profit on the investments the government
made in banks and AIG, with TARP losses limited to investments in the
automobile industry and housing programs.  And we have already returned
hundreds of billions of unused authority to the taxpayer to help reduce our debt and future budget deficits.

No one would have guessed that when then-Treasury Secretary Hank Paulson suggested the program in late 2008 that it would have worked well, if it worked at all. The mortgage-backed securities crisis had gutted bank balance sheets to the extent that several institutions failed and others, like Citigroup (NYSE: C), were supposedly weeks from collapse.

There are not many credible explanations of why the TARP was so successful. The first might be that the program was managed well. That is an unlikely suggestion because Paulson, in league with Ben Bernanke, rushed money to the banks even though several, particularly Goldman Sachs Group (NYSE: GS), said they did not need it. The disbursement of funds was not random, but it was close.

Another possible explanation is that the value of the derivative paper that had fallen so far that it threatened to swamp financial firms recovered quickly. That may be true. Banks took large write-downs on the securities, but their earnings recovered sharply within a year. The mortgage-backed derivatives did not lose more value as time went on, and profits from investment banking divisions made up for whatever deficit the securities created in bank earnings. There may still be some bad paper lurking on bank books, but the harm that it can do has apparently passed.

The real tale of TARP is that the men and women who put money into the banks were outstandingly clever in the way that they did it. Taxpayers reaped the rewards of that.