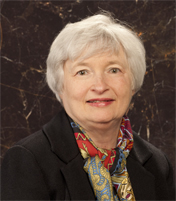 Source: Federalreserve.gov
Now that Janet Yellen is reportedly being appointed as the next chairman, or chairperson, of the Federal Reserve, the markets may get what they really wanted all along. Yellen represents a continuation of the Bernanke quantitative easing policies. You and I may have a problem with the printing or creation of so much money, but the reality is that financial markets love free money creation.

What Wall Street, Main Street and Pennsylvania Avenue all need to consider is that there are no assurances that Yellen will continue the quantitative easing policies. What she actually will represent though is a continued “Fed backstop” in case the markets and economy go into a skid again. She has been a fan of the efforts so far, so why would she suddenly change her tune?

Yellen also will be the first female to head the Federal Reserve if confirmed. She has broad support from Obama supporters and is not believed to have enough formal resistance from the Republicans, and it seems that only a few die-hard Larry Summers supporters would be against her appointment and confirmation. Even those who would have preferred Summers or another candidate still may give the formal nod on the day that the confirmation votes are made.

Larry Summers was previously the front-runner, but his past may have been a drag, even if he was more than qualified on paper. Stocks are up marginally and bond yields are firm on the Yellen news. Again, the markets love free money creation, and they generally like continuation of whatever support has worked before.

Ben Bernanke recently created some distraction in the market when he announced that the FOMC voted to keep the $85 billion per month in bond purchases alive without tapering. The reality is that Bernanke was doing an obvious strategy of passing the buck for the next person to take over. If any real tapering is going to take place, Bernanke has only about three months left on the job. That means that the tapering or the bulk of the tapering will likely begin under the Yellen regime. We would point out that in the final 90 or so days of the Bernanke term, four to six weeks of that time may simply be spent cleaning out his desk, sending thank you letters and planning a 90-day to 120-day vacation at an undisclosed location.

Again, we do not think it is fair to assume that Yellen simply will continue with a quantitative easing policy of the $85 billion in bond purchases. What we think is safe to assume is that quantitative easing and bond buying will be Yellen’s first response to the next crisis, if and when it arises. Now you know what Janet Yellen’s “run home to mama” strategy will be whenever trouble arises.