Can National Bank of Greece and Bank of Ireland Recover?

Source: thinkstock
The woes of Europe are supposed to be abating, at least somewhat. That is certainly supposed to be the case in the lands of the PIIGS — Portugal, Ireland, Italy, Greece and Spain. Ireland has re-entered the financial markets again, and even Greece has been upgraded as its recession looks to have bottomed out. Yet here we are, with the ADSs of National Bank of Greece S.A. (NYSE: NBG) and Bank of Ireland (NYSE: IRE) refusing to really recover.

One negative force could be the Banco Espirito Santo woes in Portugal. This stirred up fears, but the reality is that most market observers point out that this is a contained issue of a bank that is supposedly not a systemic risk to Europe.

The first bank to address is National Bank of Greece, because analysts had gotten more and more behind it. S&P had warned at the end of June just how fragile that Greek recovery is. Still, it is a recovery. Barron’s gave it a feature article for a turnaround in mid-June, and we had previously seen analyst upgrades from Nomura and Deutsche Bank just before the Barron’s report. J.P. Morgan even raised its rating to Overweight back in May after having raised it to Neutral just in April.

So, the chart review below shows just how bad things are. TheStreet gave a technical review of NBG just this past Friday, calling a double bottom with upside likely. We hope that is correct for NBG holders, but the stock has significantly disappointed turnaround investors for months now — without considering the endless losses suffered in the years past.

Bank of Ireland is also the last foreign public bank that trades in the United States on a major exchange. After its reverse split, the trading volume dried up, but this peaked at almost $22 at the end of February and has slid ever since. The last bit of hope came in recent days when shares bounced from under $14 to a close of $14.50 on Friday. We would remind readers that each such bounce has only been followed by more selling later.

ALSO READ: Baird’s Four Mega-Cap Bank Stocks to Buy for the Rest of 2014

One issue that has been an overhang were reports in June that Wilbur Ross would be unloading his stake in the Bank of Ireland. Ross more than doubled his money, but his exit may just signal that the “distressed” situation may have bottomed and has little real upside on a risk-reward basis. Still, it was just in May that UBS raised Bank of Ireland to Buy and just in March that Merrill Lynch raised the bank to Buy as well. Neither call has worked out.

We would consider this troublesome, and we would wonder what it will take for each bank to rise. Positive fundamentals and positive research trends are supposed to help. Technicians (chartists) would say the performance of the ADSs represent a different view.

The charts for each bank have been shown below. 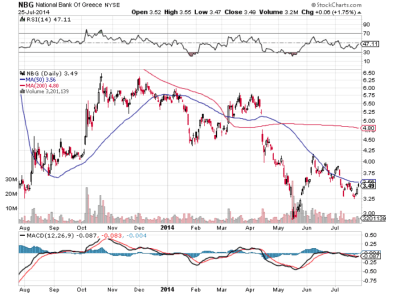 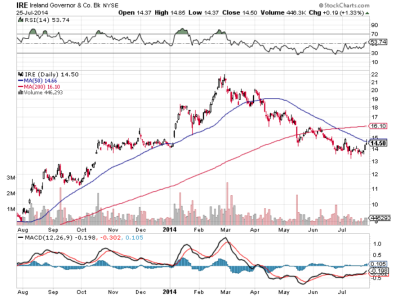