Source: Thinkstock
First Data Corp. has filed paperwork with the U.S. Securities & Exchange Commission (SEC) to conduct its initial public offering (IPO). First Data is one of the top sector players in the global commerce and e-commerce business. The company is now owned by private equity, with KKR & Co. LP (NYSE: KKR) and its affiliates holding some 74% of the company via an entity called New Omaha Holdings LP.

What matters here is that First Data was one of the largest and late buyouts during the private equity boom before the recession. KKR announced its acquisition for some $25.6 billion back in 2007.

No details have been announced in the filing other than that the filing will be for up to $100 million. Needless to say, that number may just be for filing purposes and can be greatly higher or lower when the formal IPO launches – likely much higher than just $100 million.

Reports were out in 2014 that KKR was leading another $3 billion or higher investment into the company.

ALSO READ: PayPal Worth 33 Times More Than When It Was Acquired

First Data said about itself in its IPO filing:

We serve our clients in 118 countries, reaching approximately 6 million business locations and over 4,000 financial institutions. We believe we have the industry’s largest distribution network, driven by our partnerships with many of the world’s leading financial institutions, our direct sales force, and a network of distribution partners. We are the largest merchant acquirer, issuer processor, and independent network services provider in the world, enabling businesses to accept electronic payments, helping financial institutions issue credit, debit and prepaid cards, and routing secure transactions between them. In 2014, we processed 74 billion transactions globally, or over 2,300 per second, and processed 28% of the world’s eCommerce volume. In our largest market, the United States, we acquired $1.7 trillion of payment volume, accounting for nearly 10% of U.S. GDP last year.

Here is an infographic from the First Data IPO filing: 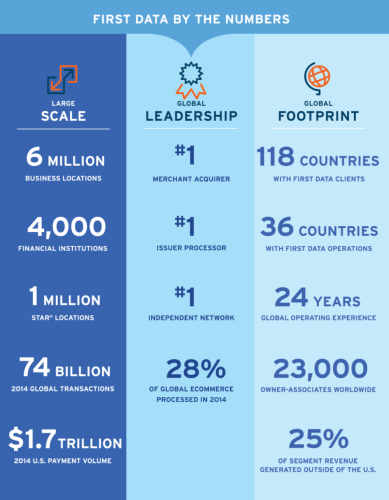