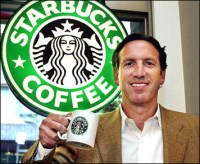 The new Starbucks  (NASDAQ: SBUX) formula for success is straightforward. Sell a wider set of products. Offer free Wifi. Concentrate on the current chain of stores instead of rapidly expanding them as the company did moving into the recession. Attack the Chinese market like all other food retailers are.

On the way to meet it goals, Starbucks has come up against the rising price of coffee and sugar. The solution is simple. Raise prices. Coffee beans cost almost twice as much as they did a year ago. Starbucks can’t raise its prices that much, at least not without alienating some customers who could decide to buy coffee to brew at home or move to less expensive products from Dunkin’ Donuts. Even Dunkin’ raised prices 11% recently.

Most coffee drinkers will not cut back on their habit, but those who want to keep the costs of that habit at reasonable levels are not likely to buy $5 drinks at Starbucks.

Starbucks frills, even free Wifi, will almost certainly lose their charms. Coffee is not the only commodity which has pressed discretionary spending. Gas prices have cut what households can spend beyond basics by an extraordinary amount – often as research from firms like Gallup show.

If Starbucks stock price was at a reasonable level, the coffee store chain might not face what is likely to be extreme pressure on its shares. They trade near a 52-week high at $36 and are up 170% over two years. Coffee prices are almost certain to cut gross margins at Starbucks. Analysts who see that coming are likely to cut price targets. Starbucks’ next earnings will probably be shy of expectations. Its guidance for future quarters will almost certainly disappoint.

Starbucks shares have had a spectacular run, but that is over.