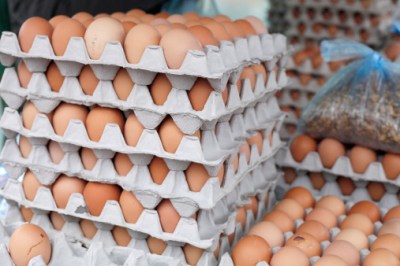 Source: Thinkstock
Cal-Maine Foods Inc. (NASDAQ: CALM) reported first-quarter fiscal 2016 results before markets opened Monday. The egg producer reported quarterly diluted earnings per share (EPS) of $2.95 on total revenues of $609.9 million. In the same period a year ago, Cal-Maine reported EPS of $0.57 on revenue of $356.9 million. First-quarter results also compare to consensus estimates for EPS of $3.14 and revenues of $599.94 million.

The company expects to pay a first quarter dividend of $0.983 per share, in accordance with the company’s variable dividend policy. For each quarter when Cal-Maine reports net income, the company pays a cash dividend equal to one-third of that income. In quarters when the company posts a loss, no dividend is paid.

The outbreak of avian flu that hit the U.S. chicken and egg suppliers earlier this year has led to record high egg prices. The chairman, president and CEO of Cal-Maine, Dolph Baker, said:

Overall sales were up 70.9 percent over the prior year period, as average selling prices for shell eggs spiked to record levels during the first quarter and were up 65.7 percent compared with the same period last year. … Our industry is still feeling the effects of the substantial reduction in the national laying hen flock that occurred this past spring related to the Avian Influenza (AI) outbreaks in the upper Midwestern United States. We believe that egg prices will remain very high until the supply situation returns to more normal levels.