Lumber prices are down nearly 30% in the past 12 months as housing construction and remodeling in China have slowed due to the country’s tightening economy. The value of Chinese imports in November totaled $498 million, down 26% year over year and down from an all-time high of nearly $900 million in April of 2014.

Log prices are also down about 30% from their April 2014 level and are now at their lowest level since early in 2009, according to the monthly Wood Resources International report. According to Wood Resources:

The reduction in house construction in China has resulted in a substantial decline in the importation of forest products during 2015 … . The total value of imported softwood logs and lumber has fallen 25% and import prices have declined almost 30% that past 12 months.

The following Nasdaq chart shows the rise and fall of lumber prices for the past eight years. Prices rose from a trough at the end of 2009 to a peak in early 2013 driven primarily by demand from China. Since that time, prices have been trending downward from a peak near $400 per thousand board feet to just below $250. 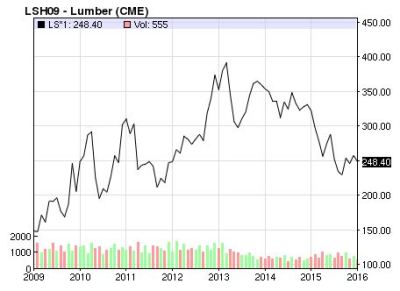 The announced $8.3 billion merger between Weyerhaeuser Co. (NYSE: WY) and Plum Creek Timber Co. Inc. (NYSE: PCL), which is expected to be completed in the first half of this year, will create a $23 billion giant in the wood products business. The combined company will own some 13 million acres of timberland, including Douglas fir and other varieties that remain in high demand both in China and Japan.