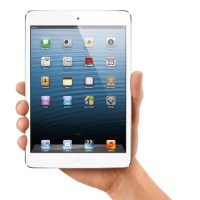 Source: courtesy of Apple Inc.
Tim Cook is making some serious changes at Apple Inc. (NASDAQ: AAPL). The moves might seem harsh, but Steve Jobs had a policy of accountability and ownership of failure. The markets may be closed today, but we have been looking for research on this. The big news is that Scott Forstall is out as head of iOS Software and John Browett is out as head of Retail. Forstall apparently has been fired after refusing to sign an apology letter after the Apple mapping debacle.

We have seen two detailed reports, and while these are ultimately positive there is at least some caution therein.

Credit Suisse Group’s (NYSE: CS) Kulbinder Garcha believes that these changes are expected to increase collaboration across hardware, software and services. Jony Ive will now lead both software interface and hardware design. Eddy Cue will take charge of Siri and Maps and will move into online services. Craig Federighi will now lead iOS in addition to the Mac OS. Bob Mansfield will lead the new Technologies group, which combines Apple’s wireless teams and semiconductors, where Apple is said to have ambitious plans. The firm is maintaining an Outperform rating with a $750 target.

Credit Suisse also noted that some risk exists in a more streamlined organization. The management changes increase execution risk and also raise concerns that the relatively new head of retail is departing quickly and retail momentum. Still, the changes are deemed as a decisive action that is positive. The report said:

We believe these moves make sense in promoting more collaboration but are still somewhat surprised with the sudden demotion of Scott Forstall. But at the same time, we don’t think it will be a big deal as the company has arguably not missed a beat despite senior departures in the past, showing the resilience of Apple’s mission and culture.

Wu talked about the less-than-stellar maps products being rolled out as fixable and getting better over time. Stern Agee officially is maintaining an Outperform rating with an $840 price target.

Wu also talked up the strong culture winning by saying:

We would like to note that this isn’t the first time that senior executives have departed the company. Some we think of include Fred Anderson, Jon Rubenstein, Tony Fadell, Avi Tevanian, and Bertrend Setlet and the company has arguably not missed a beat. We believe this is a testament to Apple’s strong culture that continues to endure despite changes in personnel through the years.