5G technology has been a hot topic for several years now, largely due to the mind-boggling speed associated with the network. While global smartphone sales have been forecast to fall by nearly 12% this year from around 1.4 billion units in 2019 to around 1.2 billion, manufacturers are gearing up to produce 1.24 billion units this year.

China-based smartphone maker Huawei is expected to manufacture nearly a third of a forecast 235 million global units for 2020. At the same time, China is expected to account for 75% of the 5G global smartphone market in the first half of this year. Huawei has had to shift its focus to China’s domestic market since running afoul of the U.S. government. The Chinese focus on 5G build-out leads naturally to Huawei’s new focus.

The second-largest producer of 5G smartphones in 2020 is forecast to be Apple Inc. (NASDAQ: AAPL). That may seem odd, since Apple does not currently sell a 5G phone and won’t introduce one until at least this fall. Yet, TrendForce is forecasting production, not sales, and Apple needs to get its 5G handset in the game if for no other reason than to maintain its cachet as the world’s top innovator.

Two other smartphone makers also were included in the top 10 most innovative companies: Huawei and Samsung. The Korean giant has had its troubles with smartphone sales in China, but those have been offset by strong sales in the rest of the world. TrendForce expects Samsung to manufacture 29 million 5G-capable smartphones in 2020.

Together, Huawei, Apple and Samsung will account for nearly 75% of all 5G smartphones built this year. For 2021, TrendForce forecasts global 5G-capable smartphone production of more than 500 million units, more than double the forecast for 2020, and roughly 40% of the total global market for smartphones.

That boost in production is attributed to the introduction of low-cost 5G chipsets leading to the production of cheaper 5G phones. TrendForce also suggests that 5G smartphone makers may chase market share by sacrificing margins. The firm even speculates that a 5G phone may drop to a price of 1,000 yuan (around $143) by the end of this year.

The manufacturers are already delivering phones that are capable of much more than most customers can get. In China, for example, the COVID-19 pandemic has slowed the build-out of the network, and TrendForce does not expect the country’s 5G network to achieve more than 50% coverage before 2025. 5G network development has been even slower in the United States.

If Apple releases a 5G-capable iPhone 12 this fall, the device is expected to range in price from around $650 to $1,400, depending on screen size and storage capacity. Even the most die-hard Apple customer could have a hard time justifying paying those prices for what amounts to a faster 4G phone in limited locations. Maybe Apple has a killer app up its sleeve that will drive sales. So far, cloud-based gaming seems to be the sector in which most of the early 5G uptake is going to happen.

The following chart from TrendForce shows the firm’s production forecast for 5G phones out through 2023. 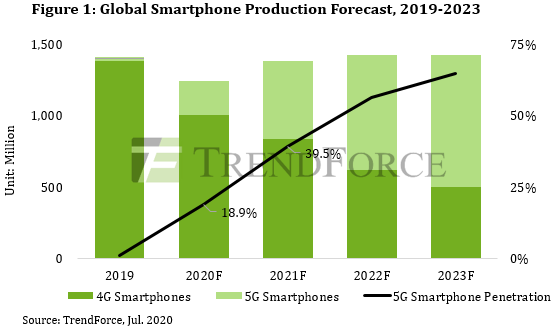