Global production of smartphones improved by 2.2% sequentially in the second quarter of 2020. Year over year, however, production declined by 16.7% to 286 million units, the largest such drop in the industry’s history.

Taiwan-based technology research firm TrendForce reported the data on Tuesday. For the third quarter, TrendForce expects production to rise to 335 million units, a quarter-over-quarter jump of 17.2%, but a year-over-year decline of 10.1%.

As with so much else, the COVID-19 pandemic gets a lot of the blame. Regional lockdowns and closed borders have pummeled gross domestic product in many countries, leaving people unsure about spending on a new phone. According to TrendForce, many such restrictions are being eased and governments are pumping money into their economies. That is good for the smartphone industry, which is in desperate need of some good news.

Number three in smartphone production is Apple Inc. (NASDAQ: AAPL). The world’s most valuable company saw a sequential increase of 8% in iPhone production to 41 million units. Sales of the SE and iPhone 11 were higher than expected, TrendForce said. The research firm also expects Apple’s third-quarter production to be juiced by the introduction of the next iPhone, tentatively dubbed the iPhone 12.

Samsung was the big (and the only) loser among the world’s six largest smartphone makers, with production dropping by nearly 16% to 55 million units. The Korean electronics giant is the world’s top smartphone maker, and even the second-quarter decline was not enough to topple the company from its perch as the industry’s market share leader.

China’s Huawei may face big problems with its network equipment, but it has become the world’s second-largest smartphone maker. In the second quarter, production increased by 13% sequentially to around 52 million units, according to TrendForce. Most of that production is destined for its home market.

The other three of the top six smartphone makers (Xiaomi, Oppo and Vivo) sell relatively few phones in the United States but have large home markets in China, and the three prioritize new devices at the entry-level and mid-range segments in Europe, India, Southeast Asia and Russia. As the Chinese government emphasizes 5G services, all three firms are expected to benefit, according to TrendForce, and those benefits are likely to come at the expense of Huawei and, to a smaller degree, Apple. 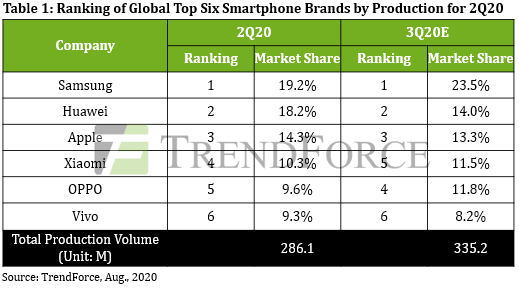 For the year, TrendForce estimates production will decline by 11.3% to 1.24 billion units. The firm also has raised its month-ago projection for 5G phones from 18.9% of total units to 19.2%, or about 238 million 5G phones.