Is 11 Million a Good Number for Apple Music? 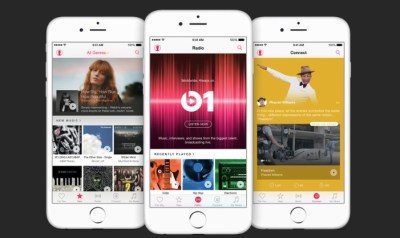 Source: Apple Inc.
The Apple Inc. (NASDAQ: AAPL) executive responsible for the company’s Apple Music business said Thursday that in the five weeks or so since Apple introduced the program, 11 million people have signed up for the free three-month trial period. Senior Vice-President Eddy Cue declared himself “thrilled” with the results in an interview with USA Today.

Perhaps only a cynic would say that the disclosure could be an attempt to stop the bleeding in Apple’s share price, which has dropped about 6% in the past five days on investor worries about iPhone sales in China and overall slower revenue and profit growth. The stock traded down less than 1% at about noon on Thursday, so maybe Cue’s statement is helping.

Whether you believe 11 million is a thrilling number or not may depend on how big a stake (either financial or emotional or both) you have in Apple. If your stake is relatively big, you can compare Apple Music’s performance to Spotify’s and the future looks pretty bright.

Spotify claims more than 20 million paid subscribers and a total user base of around 75 million — and it has been in existence for years. Not all of Apple Music’s 11 million free users are going to sign up for the $10 a month subscription once their trial period ends, but if even half do the new service will have nabbed a third as many paid subscribers as Spotify in less than half a year.

ALSO READ: What Could Apple Buy With Its Huge Pile of Cash?

Taylor Swift and others have objected to Spotify’s free tier and pulled their music from the service because they receive no payments for the free streams. When Swift said she’d keep her songs off the Apple Music service for the same reason, the company promised to pay, although Apple still has not said how much the payments will be. Apple can afford to pay, but there are doubts that the company will pay much more than Spotify’s current zero payment.

The verdict will come when Apple’s three-month trial period ends. Apple’s big problems are that it is competing with both Spotify’s free tier and YouTube’s free streams and it really does not have a compelling enough case for its streaming music subscription.

It pays to remember that a handful of artists aside, Apple and Spotify are offering identical products. Spotify subscribers are not likely to switch unless they just must have Taylor Swift’s music available to them. And about that multiyear time frame for Spotify to reach 20 million paid subscribers: it took the company five and a half years to reach 10 million paid subscribers and just one more year to add another 10 million.

It also pays to remember that all the buzz around Apple Music is about its Beats 1 radio station — which is free.