Vista Outdoor Inc. (NYSE: VSTO) has been diversifying itself ahead of and after its split with Alliant/Orbital. This is the largest maker of ammunition in the United States, supplying law enforcement, military, government and consumers with an endless array of ammunition brands. Vista Outdoor shares closed down just 0.4% at $39.66 on Friday, versus a November 8 price of $38.94. The 52-week range is $37.00 to $53.91, and the consensus analyst target is $49.10.

Olin Corp. (NYSE: OLN) is another company with shares often tied to the gun trade. Olin closed down 1% at $25.94 on Friday. It has a $4.3 billion market cap, a 52-week trading range of $12.29 to $26.93 and a consensus price target of $25.70. What is different about Olin shares, versus pure gun trade stocks, is that they were trading at $22.45 on November 8. Olin is considered a chemical products maker, but one of its three segments is guns focused: Chlor Alkali Products and Vinyls, Epoxy and Winchester.

What investors should likely prepare for is that the consensus analyst targets of gun stocks should be coming down. Keep in mind that if a Wall Street analyst covering gun stocks lives in or around New York City, there is a real good chance he or she cannot even legally buy a gun with ease.

Before thinking that the gun stocks will die off or face endless wrecks ahead, keep in mind that these stocks are generally well off their highs already. We would still expect that there would again be surges in these stocks around incidents of terrorism or mass shootings.

Again, Trump is considered very gun-friendly and the NRA backed him. That means that the gun-buying portion of the public’s insatiable demand may have just been given a reason (Clinton’s loss and Obama’s departure) to slow down some of the endless gun purchases. Also, you don’t hear much about doomsday preppers any more (and preppers made for a multi-billion economic footprint in years past). We have even heard gun and ammunition sellers talk about a return to more normal demand trends without the massive surges in demand that led to shortages and price hikes. This likely means more normalized margins for gun and ammo makers ahead.

Firearm background checks were up massively in November and October and have been much stronger in the Obama years than in the Bush years (see FBI chart below on background checks, even though these do not correlate one-on-one with total numbers of guns sold). That demand is likely to abate in the months or quarters ahead.

Even if there are terror attacks or more mass shootings, the craze demand trends that were in place over the Obama years could easily take a breather after 2017. One serious caveat that could keep gun demand high is if gun prices drop handily from supply gluts. A second caveat would be a drastic rise in crime or if protesters end up turning more toward insurrection. 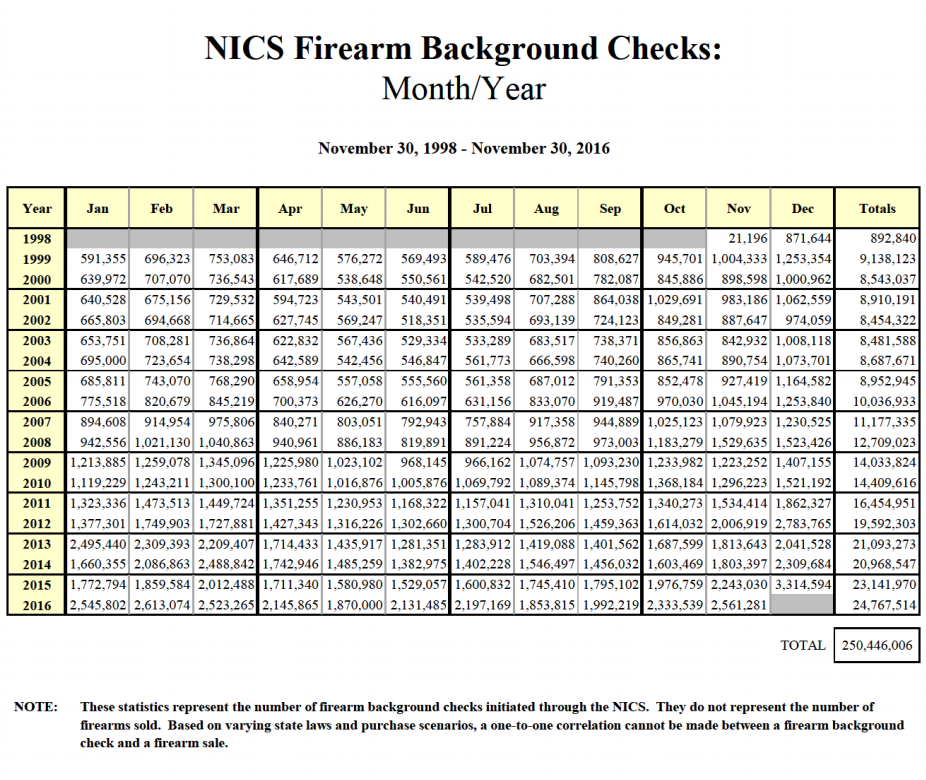