More Than Half in Marijuana Industry Concerned About Trump Administration

The election of Donald Trump and his subsequent nominees to several key posts in his incoming administration have raised a lot of concerns in the marijuana industry. According to a recent online survey, more than half (57.4%) of industry players are “somewhat” or “very” concerned about their business prospects under a Trump administration. More than half that total (30%) are “very” concerned.

About a third of respondents to the online survey conducted by Marijuana Business Daily say they are “somewhat” (16.1%) or “very” (17%) optimistic about their prospects. That correlates with a pre-election poll of industry executives in which 32% said they planned to vote for Trump.

Among the various industry sectors, growers were evenly split: they represent the most upbeat (44%) group, but an equal percentage were also pessimistic. Retailers (71.4%) were the most pessimistic. Just 14.3% of retailers are optimistic.

The industry also got a bit of good news last week with the enactment of the continuing resolution that will keep the federal government running through April 2017. Included in the measure was an extension of the Rohrabacher-Farr amendment that prohibits the federal government from spending any funds to interfere with state medical marijuana programs.

While the reprieve from a possible change in enforcement if Alabama Senator Jeff Sessions is confirmed as Trump’s attorney general may be only temporary, at least it gives medical marijuana advocates some time to marshal their forces. Representative Dana Rohrabacher (R-CA) has said he is confident that the amendment will be renewed by Congress. He also hopes that Congress will extend the protection to recreational marijuana laws as well.

Here’s a chart from Marijuana Business Daily showing the results of its latest survey: 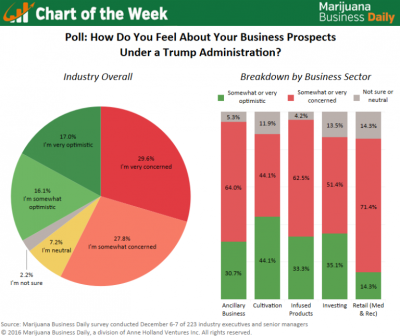