Americans to Obama: The Economy Is All That Counts

Source: thinkstock
President Obama cannot run for office again, at least not for the presidency. So, the effects of his approval ratings are academic. However, he may care about how he is considered in his second term. If so, all most Americans care about is the health of the economy.

The economy is supposed to be getting better. According to The White House, it is already tremendously better than during the recession. Many Americans do not agree with that assessment. Almost all these people think about is what the economic future of America, and themselves, will be.

According to a new poll from Gallup:

The economy carries the greatest weight of nine key issues in determining how Americans rate President Barack Obama overall. Americans who approve of the job Obama is doing on the economy are six times more likely to approve of Obama’s overall performance than those who disapprove of Obama’s handling of the economy. That is nearly double the impact of any other issue. The next-most-influential issues are healthcare, terrorism, and the federal budget deficit.

“Six times” is not a typographical error.

The opinions of people who are worried about the economy likely rest with job creation and the stagnation of wages. Unemployment at well over 7% remains much higher than what experts believe reflects national economic health. The real wages of Americans who make the national median household income have fallen in the past decade. The prices of most of the things they need to cover daily living expenses have risen.

One of the oddities of the Gallup results is that the deficit is usually tied to the strength of the economy. Many Americans apparently do not believe that, or perhaps do not understand it. Either way, the war in Washington over debt and deficits gets lost as people consider how they live.

Because the cost of health care is so large a part of many people’s overall costs, and people worry about their health in general, one might think it would be higher on the list. Clearly, many Americans set that issue aside, perhaps because they believe they cannot afford good care. Such an assumption is absurd, because it appears thin. However, that does not mean it cannot be true.

The state of the economy was at the top of most people’s lists throughout the recession. Even with what is described by the White House as a recovery, many Americans are not convinced. 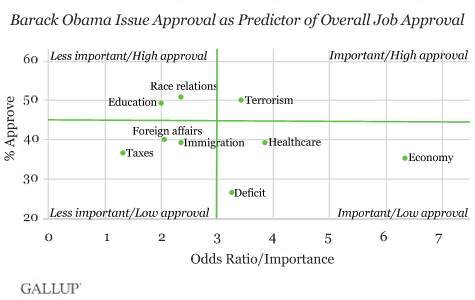 Methodology: Results for this Gallup poll are based on telephone interviews conducted Aug. 7 to 11, 2013, with a random sample of 2,059 adults, aged 18 and older, living in all 50 U.S. states and the District of Columbia.

The Most Affordable City to Own A Home