US Growth Forecast Chopped to Zero 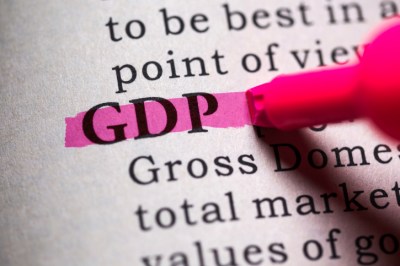 Source: Thinkstock
The Federal Reserve Bank of Atlanta has reported that its forecast for U.S. gross domestic product (GDP) growth dropped to zero on April 1 and ticked back up to 0.1% on April 2. The bank uses a unique model called GDPNow to prepare its forecasts, and the model typically estimates growth well below the rate projected by the Bureau of Economic Analysis (BEA).

The GDPNow model aggregates the same 13 subcomponents used by BEA to construct its estimate, but when a data point is not available, the model uses “bridge equations” to fill the gap. Other forecasters use similar “nowcast” techniques, but the Atlanta Fed notes that other forecasts are not updated more than once a month or once a quarter. Also, they are not publicly available and do not include forecasts of the subcomponents that add color to the top-line number. The GDPNow model fills those voids.

On February 2, the GDPNow model forecast GDP growth of 1.9%. At that time the change in net exports was forecast to be down $15 billion. By March 12, that total had dropped to a $40 billion negative change. Nonresidential construction spending was initially forecast to drop by 1.5% and is now forecast to be down 22.5%.

The following chart shows the relationship between the Atlanta Fed’s GDPNow forecast and the Blue Chip consensus. 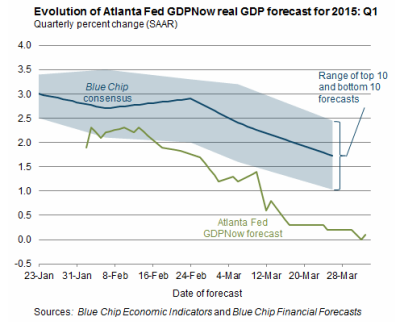 GDP growth may not actually reach zero in the first quarter of 2015, but there does not appear to be much question that it will end up well below where initial forecasts put it.

Proposed $500 One-Time Tax Rebate From Georgia: Who Could Get It?

The Country With the Most COVID-19 Cases in History