Over $10 Trillion in Sovereign Debt Now at Negative Yields

Now a report came out from Fitch Ratings showing that there was a whopping $10.4 trillion in sovereign debt with negative yields in May. This means that rather than earning money for investors, investors are effectively paying a tax or are paying a penalty just to get their cash back in the future.

Fitch noted that unconventional monetary policies, regulatory risk mitigation by banks, and a flight to safety in global financial markets are all key contributors to the negative rates of sovereign debt.

The amounts of fixed-rate sovereign debt trading at negative yields was broken down as $7.3 trillion in long-term debt and $3.1 trillion in short-term debt (as of May 31).

Fitch showed on April 25 that the sovereign debt with fixed rates in the negative was $9.9 trillion, so there has been more than a 5% rise in negative-yielding debt in just a month.

Japan remains the largest source of negative yields. Other key contributors to negative rates are from Germany, France, and Italy. Fitch’s report said:

Higher amounts of Japanese and Italian sovereign securities with sub-zero yields were the biggest contributors to the monthly changes. Yields on some Italian securities with maturities between 1.5 and 3 years flipped to negative from positive, and long-dated Japanese securities have gone further into negative territory since April 25. Core Eurozone yields were driven lower as weak inflation and manufacturing data, as well as the expansion of the ECB’s bond-buying program, continued to fuel demand for Eurozone sovereign debt.

All this of course depends on pricing, which is hopefully driven by real supply and demand forces in the bond market. That being said, asset purchasing by the European Central Bank continues and may be increased if needed.

24/7 Wall St. went to Bloomberg to get some live quotes on the amount of debt at negative yields. On top of Germany, France, Italy and Japan, Switzerland and other nations in Europe are trading at negative yields now. The first large column below tracks long-term debt, while the second column shows Germany (Bund) and Japan (JPY) for their intermediate to long-term yields marked in red for negative yields.

Imagine trying to build long-term investment models where the risk-free rate of return is zero — or even negative. Oh wait, that’s already happening. 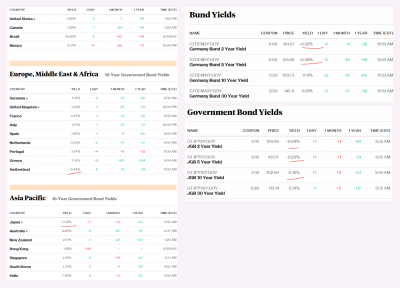