Stocks have risen handily since the end of the election, but so have bond yields. Now we have close to 100% chance that there will be an interest rate hike by the Federal Reserve in December. It appears that the trend of shrinking negative yields on sovereign debt overseas is continuing to shrink.

Fitch Ratings has pointed out that the total dollars of outstanding negative-yielding sovereign debt was down to $9.3 trillion as of November 28. The total fell by more than $1 trillion in less than a month — and this is down from $11.7 trillion at the end of the first half of 2016.

The drop is happening all over the curve, but long-dated sovereign debt is seeing a drop in negative yields outstanding in dollar terms. Fitch showed that only $1.0 trillion in debt with seven or more years until maturity carried a negative yield — versus $1.5 trillion on November 1 and compared to $2.6 trillion as of June 27.

Fitch also noted that the sharp drop in the total negative-yielding debt could be positive for institutional bond investors who have to put new money to work. One flip-side issue to consider here is that this is creating losses for long-term bond investors.

If sustained, it could also help to arrest the trend of falling investment income due to record low and declining sovereign yields over the past several years.

The dollar amount of negative-yielding debt outstanding in Europe has decreased in every country since November 1. Fitch showed that there is $3.2 trillion in negative-yielding sovereign debt in the continent. That is down about $0.4 trillion since the beginning of November and down $0.6 trillion from June 27.

Japan was shown to still have the most negative-yielding debt outstanding than all of Europe. Still, Japan’s amount of debt with yields below zero in Japan decreased to $6.1 trillion from $6.9 trillion on November 1 and $7.9 trillion on June 27. Fitch said:

For the first time since March, yields on the 10-year Japanese bond are above zero. Yields on the short end of the curve have also increased in Japan, but remain negative as the Bank of Japan recently announced their plan to buy unlimited amounts of one- to five-year sovereign debt issues to help control the yield curve.

Negative yields are not likely to die off entirely for quite some time. That being said, more shrinkage in outstanding negative-yielding sovereign debt will continue to act like a tax rather than investment.

A chart from Fitch (below) is showing a sharp drop from when sovereign debt was peaking earlier in 2016. 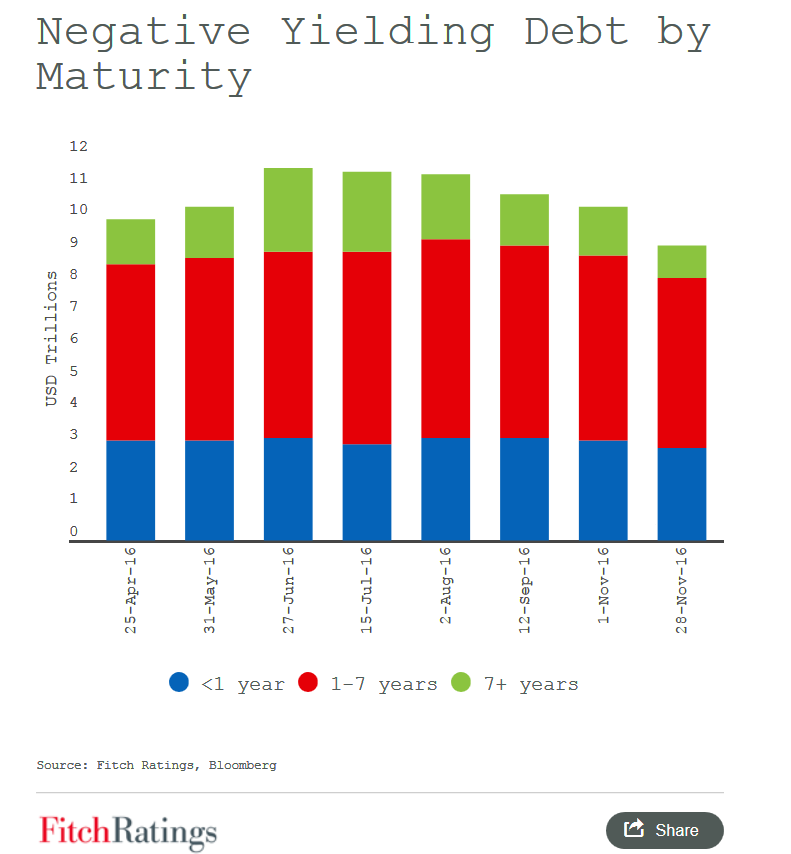