Deutsche Bank: The US May Now Be in a Recession

Three months ago, we presented an analysis which showed something disturbing: according to Deutsche, the “current business cycle is already the fourth longest in the post- WWII period, and the corporate debt-to-GDP ratio suggests that imbalances are building”, and that worse, as a result of soaring corporate debt and rolling-over profit margins, “a recession could hit as soon as the second half.”

Overnight, and three months since its last such analysis, Deutsche Bank has published an update. It shows that, as illustrated in the chart below, profits per worker have generally trended higher over time. This is a function of productivity gains and inflation. However, this has changed in recent years.  “In the current business cycle, margins peaked at $18,752 per worker in Q4 2014. This compares to a ratio of $16,487 per worker as of Q2 2016. Margins have fallen because corporate profits have declined -6.3% annualized over the past six quarters, while private sector job growth over this period has been very steady at around 2.1%.” 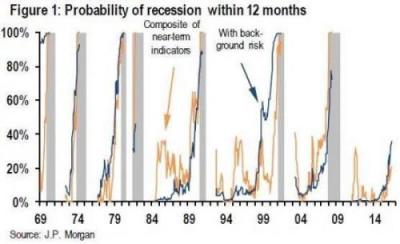 So we have unemployment. However, a far bigger risk to the US economy is a topic we have flagged since last fall: peak, and now sliding, profits.

Because as DB’s Dominic Konstam notes something every high school econ student knows, companies cutting headcount in rising numbers, while beneficial for profits at least in the short run, has negative impacts for long-run aggregate demand, to wit:

If aggregate demand is steady, then slower employment growth could well stabilize or improve productivity. However, the rub as always is that workers are also consumers, so as fewer jobs are created (or jobs are cut), then aggregate demand tends to decline.

As such, declining profits and a slowing work force (as the exodus from the labor force returns) is the worst possible feedback loop for an economy; it is the one that the US finds itself in now, ironically just as the Fed hopes to telegraph the all clear by continuing to hike rates and in doing so confirming just how misplaced the Fed’s optimism has been all along.

So while the BLS was finally forced to admit the truth about the US labor market yesterday, here is a reminder from DB’s most unexpected “bear”, Joe Lavorna, that “profit margins have likely peaked”:

If it were only jobs and profits, maybe the Fed would have some degree of control, even if it is reflexive. Normally tightening happens after companies start competing for scarce labor resources, generating cost inflation at which point the Fed raises rates to ease inflation pressures and un-compress cost pressures; only this time the Fed is putting the cart in front of the horse and is hoping that by tightening it will somehow prompt wage inflation which has been the biggest variable missing from the US economy. By way of reference, the last time the unemployment rate was 4.7% in November 2007, average hourly earnings were growing 3.1% Y/Y without a raise in the minimum wage; now wages are rising at 2.5% mostly thanks to the boost for the lowest-paid workers.

However, what is very different this time, is that companies have taken on debt in the current business cycle. Make that lots of debt.  As DB calculates, nonfinancial corporate debt has increased by $2 trillion from its trough in Q4 2010 through Q4 2015. And here things get interesting because as shown in the chart below, the ratio of nonfinancial corporate debt to nominal GDP is at its highest level since Q2 2009, when the economy was still in recession and nominal output was substantially depressed. As LaVorgna puts it, “this is one reason why the Fed needs to be very cautious with respect to the pace of policy normalization.”