US Incomes, Wealth Increased Most Among the Wealthy

The data were reported Tuesday by the University of Michigan’s Panel Study of Income Dynamics (PSID), a longitudinal study begun in 1968 that tracks employment, income, wealth, health, childbearing and development, and education, among other data points. The PSID data were collected in 2015 and covers the period between 2012 and 2015.

Since 1967, the 95th percentile of the income distribution has seen much larger increases than the median or the 10th percentile. The data are based on aggregated income, which includes no adjustment for inflation or taxes. Between 2012 and 2014 inflation was 3.1%. The following chart from this year’s report makes this abundantly clear: 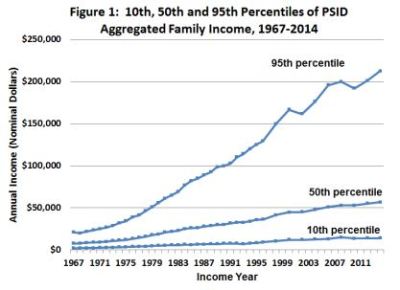 The PSID also collects information related to health insurance and the health status of family members. The percentage of adults who lacked health insurance fell from 13% in 2013 to 8% in 2015.

Because of the longitudinal nature of the PSID, we can evaluate families who have been the top income earners for decades, and whether they remain the top income earners today. … There’s a big interest in what’s called ‘intergenerational mobility’—how your family was doing when you were a kid compared to how your family is doing now that you are grown up. These data can tell us how much the life chances of the nation’s youth are shaped by their parents’ and grandparents’ economic status.

Highlights from the 2015 study are available at the PSID website.