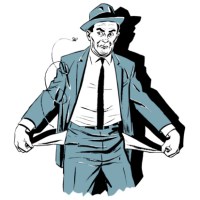 Financial distress, or difficulty meeting debt obligations, is a daily part of life for many Americans, and for some, the lenders have come calling. More than one third of Americans with credit histories faced debt collections in 2013, according to a recent report from the Urban Institute.

Click here to see the states struggling with delinquent debt

While having debt in collection can be a problem, taking on debt that can be repaid is not necessarily bad. Caroline Ratcliffe, a senior fellow at the Urban Institute and an author of the report, noted that buying a home, starting a business, or investing in education are productive kinds of debt that allow people to grow their assets.

Yet, for residents who fall behind, debt can become a burden. Since the recession, Americans have focused on paying off debt. The amount of standing consumer debt fell by over a trillion dollars, from $12.7 trillion to $11.2 trillion, between 2009 and September 2013. However, the Urban Institute’s report found that the percentage of people with debt in collections remained effectively unchanged from 2004 levels.

While high average levels of delinquent debt did not appear to be concentrated in any particular region, southern states were much more likely to have a higher share of people with debt in collections. Eight of the 10 states on our list are located in the southern U.S.

In all of the states with the highest percentage of residents with delinquent debt, the median household income was below the U.S. median of $51,371. Four of these states — Alabama, Kentucky, Mississippi, and West Virginia — were among the five lowest states by median income. Additionally, these states tended to have higher shares of people who lived below the poverty line when compared to the national benchmark.

To identify the states with the highest share of the population with delinquent debt, 24/7 Wall St. reviewed the Urban Institute’s recently released report, “Delinquent Debt in America.” The report used 2013 data from TransUnion, which looked at Americans with credit histories who are reported as at least 30 days late on a non-mortgage payment, in addition to Americans reported as being in collections. We also reviewed median household income and educational attainment data from the U.S. Census Bureau for 2012. Data on personal disposable income growth data comes from the Bureau of Economic Analysis (BEA) and are current through 2013. Inflation figures are also from the BEA. Figures on average debt and average credit rating by state are from Credit Karma. Data on unbanked households, those without a bank account, are from the Federal Deposit Insurance Corporation’s 2011 National Survey of Unbanked and Underbanked Households.

These are the states struggling the most with debt.