Most Americans Don't Expect Their Finances to Improve

As a partial government shutdown begins to bite the economy, trade friction with China increases and real wages have been close to static for over a decade, Americans do not think their financial situations will improve. Over half of those surveyed believe that their situations will be static in 2019.

According to a new study by Bankrate, many people are more pessimistic. Of the 55% who think their financial positions won’t improve this year, 12% think they will worsen. Some 44% believe their financial situations will improve.

If you think about, first of all, just that in general, the erosion of confidence in institutions and then you think about essential developments in recent years with respect to government shutdowns, the divisive nature of national politics and the lack of the ability on the part of elected leaders to forge productive and constructive solutions to major problems — it is understandable why people may feel that way.

Among the factors Americans most worry about, according to the researchers, are “work done by political leaders in Washington” at 49% of those people who think their financial situations will worsen. Also, 38% believe that their “cost of living will worsen” and 37% list “having more debt.”

The number of economists who believe that there will be a recession this year or in 2020 has grown. Both the International Monetary Fund and the World Bank have cut their forecasts for growth in 2019 and 2020. Recent data from China shows its economy has started to slow considerably, likely due to a trade war with the United States.

The Bankrate data adds to a lengthening list of evidence that 2019 could be a tough year for Americans.

The Bankrate survey was conducted between December 14 and December 16, 2018. 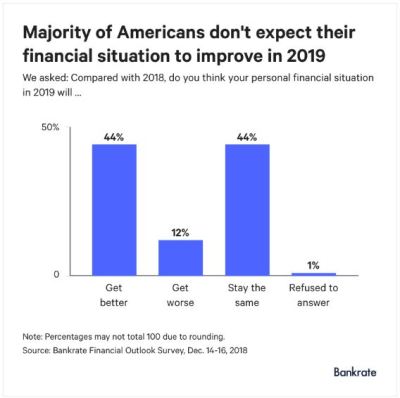